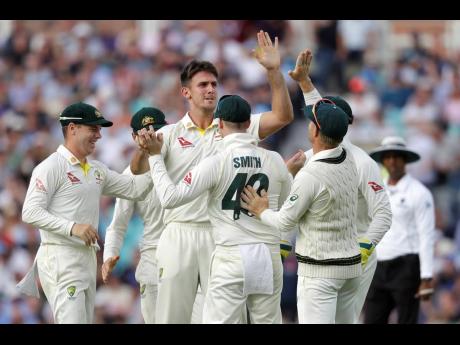 Australia’s Mitchell Marsh celebrates taking the wicket of England’s Sam Curran (centre) during the first day of the fifth Ashes Test match between England and Australia at the Oval cricket ground in London yesterday. 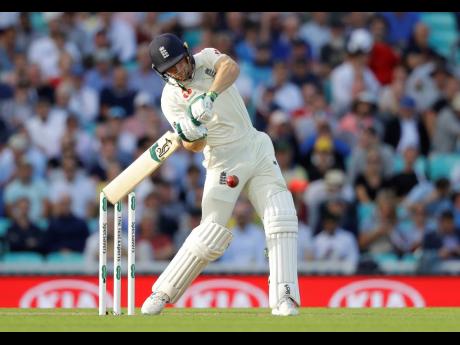 England’s Jos Buttler plays a shot for six off the bowling of Australia’s Josh Hazlewood.
1
2

Mitch Marsh marked his first appearance of the Ashes series by returning 4-35 to help restrict England to 271-8 on the first day of the fifth Test at The Oval yesterday.

Put into bat by Australia in a gamble by captain Tim Paine, England was pegged back from a strong position at 103-1 after lunch as Marsh ran through the middle order to immediately justify the decision to call him up in place of Travis Head.

Joe Root, dropped three times, scored 57 and Jos Buttler was 64 not out after putting on an unbeaten 45-run partnership with tailender Jack Leach (10 not out) to frustrate the Australians late in the day.

Australia have already retained the urn after winning the fourth Test at Old Trafford last week to take a 2-1 lead in the series. England still have a chance to tie the series at 2-2, though, to end on a high a summer that saw the team win the Cricket World Cup for the first time.

The English haven't lost an Ashes series at home since 2001, either.

Marsh, who was playing his first Test since December last year, had a brilliant spell of 3-16 in seven overs after tea and is likely to finish with the best bowling figures of his career in Test. The only other time he took four wickets in an innings was when he had 4-61 against West Indies in Melbourne in 2015.

"I had a fair bit of adrenaline running through my body and I probably haven't bowled a spell that long ever," said Marsh, who had to cut short his 17th over of the day after just one ball because of cramp.

"I was like a kid at Christmas this morning. It can be a long tour when you are not playing. I just wanted to try and get an opportunity at some stage and it was nice to produce today."

From 170-3, England lost five wickets for 56 runs only for Buttler to launch his fightback.

Hit on the chest on 17, he decided to take matters into his own hands and peppered the boundary -- unloading three sixes and six fours in his 84-ball knock.

"With the new ball not being far away, I thought it was the best time to go for it and I was just trying to have some fun, too," Buttler said. "Batting has been hard work and not enjoyable this series so I wanted to take the shackles off and play with a smile on my face."

Paine was influenced by what he described as a "strange-looking" pitch with a tinge of grass, pressing Pat Cummins and Josh Hazlewood back into service just four days on from the rigors of the fifth day at Old Trafford when Australia retained the urn.

Rory Burns and Joe Denly managed to scramble together 27 runs in just under 10 overs -- remarkably the highest opening stand of the series -- before Cummins parted them, Denly (14) with a familiar waft outside off stump and Steve Smith taking the slip catch after a couple of fumbles.

Any doubts Paine had over his decision at the toss would only have intensified when Root top-edged a pull from Cummins only for Peter Siddle to let the ball slip through his hands at fine leg.

Root was spared again moments later when Cummins took his outside edge but Paine put down the chance having leapt one-handed in front of David Warner at first slip. Burns took the opportunity to settle things down, guiding the score to 86-1 at lunch.

Australia's profligacy in the field continued in the first over of the afternoon session, Siddle this time the victim rather than the perpetrator. He tempted Root into flashing away from his body, only for Smith to parry a simple chance in the cordon.

Unlike Root, Burns didn't get to his half-century, trying to do too much with a well-directed short ball from Hazlewood on 47 and looping the easiest possible catch to Marsh as he strolled in from mid-on.

That brought Ben Stokes to the crease, complete with a shoulder injury and the added responsibility of batting a place up at No. 4. He could only make a scratchy 20 before an ugly mis-hit pull lobbed to Nathan Lyon at point.

Cummins squared Root up and coaxed enough from the pitch to knock back off stump and Jonny Bairstow was close behind, lbw to an inswinging yorker from Marsh for 22.

Sam Curran had a brief but entertaining stay -- hooking a six, lbw to a Cummins no-ball, carving a four and slashing Marsh to second slip for 15 -- all in the space of 13 deliveries.

Marsh made it four wickets with another yorker at Chris Woakes (2) and Hazlewood was quick to dispatch Jofra Archer (9).