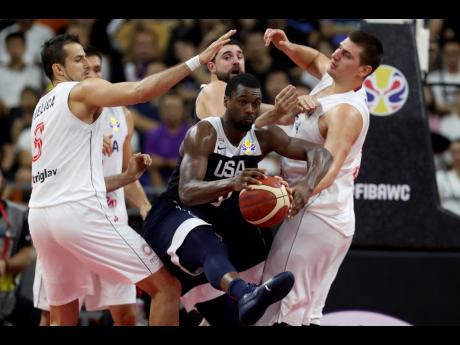 The USA basketball team came to China looking to again be the best in the world.

It will go home with the worst tournament showing in programme history.

Such is the reality for the Americans now, assured of finishing no better than seventh at the World Cup after falling to Serbia 94-89 in a consolation game yesterday. The previous worst finish for a US men's team in major tournament appearances was sixth at the 2002 world championships.

"We've committed to this from day one," guard Joe Harris said. "To get all the way to this point and just kind of have it abruptly come up short, it really stings."

The Americans - the top-ranked team in the world - will be seventh or eighth in China, depending on the outcome of their consolation finale against Poland on Saturday. Harrison Barnes scored 22 for the US, which got 18 from Kemba Walker and 16 from Khris Middleton. And even though this team earned the country's berth into the 2020 Tokyo Olympics field, Barnes noted post-game that Saturday's finale may be the last time many members of the World Cup squad get the chance to play for their country.

"We're also the ones who stepped up to the plate when others stepped down. We qualified our nation for the Olympics," Myles Turner wrote as part of a thread on Twitter after the game.

"It's a really tough game to play against those guys," Bogdanovic said. "I'm sure both teams were really upset after losing in the quarter-finals and we were just trying to make people happy."

A Serbia-USA game was widely expected to be one for gold this weekend. The prospects of that were hyped plenty going into the tournament - especially after Serbia coach Sasha Djordjevic called out the Americans in a television interview by saying, "If we meet, may God help them." But all that was on the line yesterday were bragging rights and a few world ranking points.