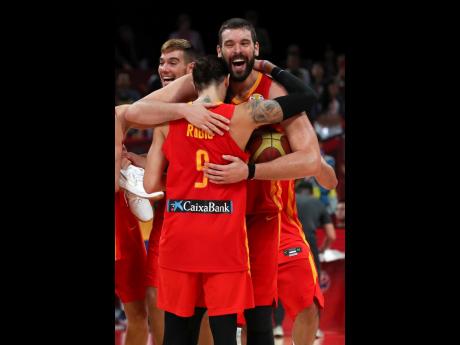 Marc Gasol looked to the sky as confetti fell, some sticking to his massive shoulders, and then cradled and kissed the giant golden chalice that goes to the World Cup champions.

He’s getting good at hoisting trophies.

Gasol got to bask in a championship celebration for the second time in three months — and this time, he did it for his country. Tournament MVP Ricky Rubio scored 20 points, Sergio Llull added 15, and Spain won the World Cup for the second time by topping Argentina 95-75 yesterday.

Gasol scored 14 for the winners, who never trailed, and added this crown to the one they claimed in 2006. And for him, 2019 will go down as a year the likes of which few others have enjoyed.

The Toronto Raptors centre becomes the second player to win an NBA title and a FIBA world gold medal in the same year, joining Lamar Odom — who did it for the Los Angeles Lakers and USA Basketball in 2010. Gasol also became the 19th to win either an NBA or WNBA crown along with a gold medal, either of the Olympic or World Cup variety, in the same year.

“NBA champion and a World Cup champion as well,” Gasol said. “What can I say? How does it sound to you? I feel very fortunate to be in this position and be able to play this game and help these guys be part of history of Spanish basketball.”