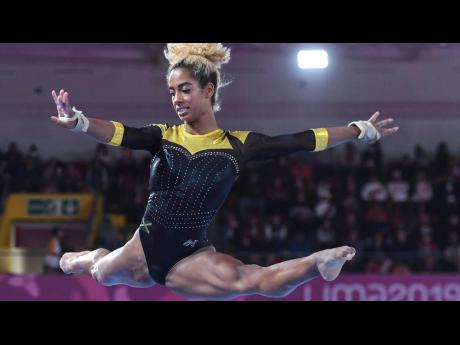 Artistic gymnast, Danusia May Francis, has given the nation and the Jamaica Olympic Association (JOA) their first official qualification for next year's Tokyo Olympics.

Francis' qualification was expected as she had, along the journey, performed consistently well and displayed the confidence of a specialist in her field.

JOA president, Christopher Samuda, in welcoming the news, was reflective.

"Look back at the journey and you will see commitment and resolve, grit and determination, pride in country and self-confidence, athleticism and prowess, creativity and artistry. That's Danusia and this represents what the JOA is instilling in its members and their athletes. You've got to get it right from the get-go to claim the prize," said Samuda.

Francis, over last weekend, claimed a berth at the 2020 Games after competing at the World Gymnastics Championships in Stuttgart, Germany and the JOA gave solid support as she pursued her Olympic dream.

Secretary General and CEO of the JOA, Ryan Foster, said: "We saw immediately the talent and an Olympic prospect in Danusia and invested in one of Jamaica's finest gymnasts. We funded her campaign in Stuttgart and have funded others because we had the conviction and in this case Danusia gave us good reason to do so."

The JOA continues its drive to transition talent of the often termed 'non-traditional' sports to the regional and global stage in demonstrating the versatility of Jamaica's credentials.

"Let's understand it clearly. Each sport has an equal right to place its stock in trade in the arena, to be recognised and acknowledged and to fight for a coveted place in sporting history. That's our (JOA's) philosophy and approach," Samuda said. Francis was born in 1994 in Coventry, United Kingdom but did most of her gymnastics training in the United States. She is a former member of the University of California, Los Angeles gymnastics team. She finished 47th in the all-around at the Stuttgart championships attaining a score of 50.982.