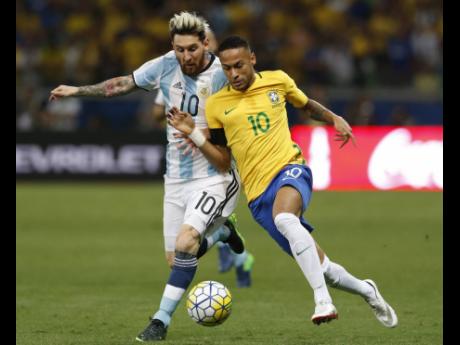 Argentina’s Lionel Messi (left) and Brazil’s Neymar fight for the ball during a World Cup qualifying match between Brazil and Argentina in 2016.

Ahead of his 100th game with Brazil, Neymar is adamant that he still deserves special treatment in the national team despite never having won a major title in his nine years wearing the famous yellow shirt.

The 27-year-old forward will reach the century mark in a friendly against Senegal in Singapore today and defended his status as the team's biggest star even though Brazil won this summer's Copa America without him.

"I was always one of the main figures and one of those carrying it all on my back," Neymar said at a news conference yesterday when asked about getting special treatment. "I never ran away from that. I always played my role in the national team very well. When a player reaches that level it is normal that there is a different treatment."

"I was in places that had players with more history than me and I had to respect what coaches did for them," the Paris Saint-Germain striker added. "Messi has a different treatment at Barcelona. Is it because he is better looking? No. It is because he is decisive. He earned it. I don't say that only about myself, but I say it about everyone that has performances at that level. That is normal in football."

Neymar's comments come at a time when some Brazil fans have accused coach Tite and the Brazilian confederation of being too lenient with the striker over his problems off the pitch. Those include his altercation with a fan after the French Cup final in April; his insistence that his father-agent was allowed into Brazil's dressing room during a pre-Copa America friendly; and a rape allegation that was recently closed by police.