Rockets to focus on basketball after fallout from GM’s tweet 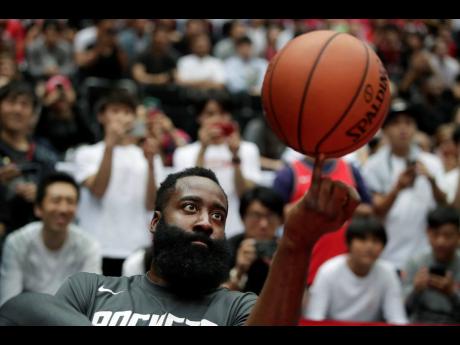 Houston Rockets’ James Harden spins the ball during warm-ups for the team’s NBA preseason basketball game against the Toronto Raptors October. 10, 2019, in Saitama, near Tokyo.

The Rockets are back home in Houston, looking to leave behind the distractions from their trip to Asia.

Their two games in Japan were overshadowed by the aftermath of a tweet by general manager Daryl Morey in support for anti-government protesters in Hong Kong, angering fans and officials in China.

In their first practice since returning, the Rockets insisted they wouldn't let the fallout distract them from preparing from the season.

"Guys can handle it," coach Mike D'Antoni said. "We still got good work in. Everything's fine, but you know what happened (is) regrettable, and it happened, but as I said, our work will get done."

Veteran P.J. Tucker denied that dealing with this situation has been a distraction to this team trying to contend for its first title since winning back-to-back championships in 1994-95.

"Not really, honestly," he said. "This time of season, everybody's getting in shape, getting ready for the season, focusing in. So with all of the things that go on in life, and whatever, this is still our job, so we still come in and do our job every single day."

The Rockets were in Hawaii on Oct. 4 to play a preseason game against the Los Angeles Clippers on the first leg of a trip that included two games in Japan, when Morey tweeted an image that said: "Fight For Freedom. Stand With Hong Kong." His tweet was in reference to pro-democracy demonstrations in the semi-autonomous Chinese territory that has been mired in escalating violence between protesters and law enforcement.

The tweet was deleted soon after it was posted, and Rockets owner and billionaire casino and restaurant owner Tilman Fertitta quickly rebuked his GM with a tweet saying that Morey does not speak for the team. He added: "Our presence in Tokyo is all about the promotion of the NBA internationally and we are NOT a political organisation."

Despite the swift response from Fertitta, the damage was already done. Former Rockets star Yao Ming took offence to Morey's support for the anti-government protesters and as president of the Chinese Basketball Association, suspended its ties to the Rockets over the tweet.