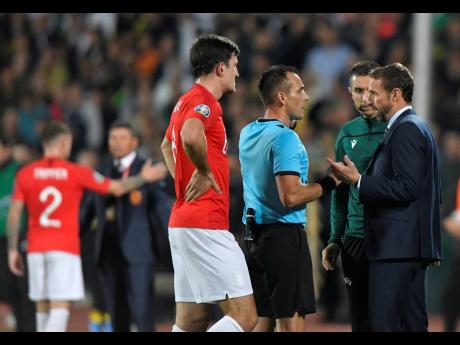 England manager Gareth Southgate (right) speaks with referee Ivan Bebek during the Euro 2020 group A qualifying match between Bulgaria and England, at the Vasil Levski national stadium, in Sofia, Bulgaria, on Monday.

UEFA President Aleksander Ceferin urged governments to escalate the "war on the racists" to help football authorities eliminate them from stadiums after England players faced abuse in Bulgaria.

In a statement to The Associated Press yesterday, Ceferin blamed a rise in nationalism across Europe for fueling racism at matches and said UEFA was committed to imposing strong punishments.

The Bulgarian Football Union was charged by UEFA over its fans making Nazi salutes and directing monkey noises at England's black players, which led to the European Championship qualifier in Sofia being stopped twice on Monday.

"Believe me, UEFA is committed to doing everything it can to eliminate this disease from football," Ceferin told the AP. "We cannot afford to be content with this. We must always strive to strengthen our resolve.

"More broadly, the football family -- everyone from administrators to players, coaches and fans -- needs to work with governments and NGOs (non-governmental organisations) to wage war on the racists and to marginalise their abhorrent views to the fringes of society."

But the English Football Association is also facing punishment from UEFA after a disciplinary case was opened into their fans jeering through the Bulgarian national anthem and bringing an insufficient numbers of stewards.

The Bulgarian Football Union was also charged for disrupting the English national anthem. But, in a swift fallout after coming under pressure from Bulgaria's prime minister, BFU president Borislav Mihailov said he would resign at a meeting on Friday.