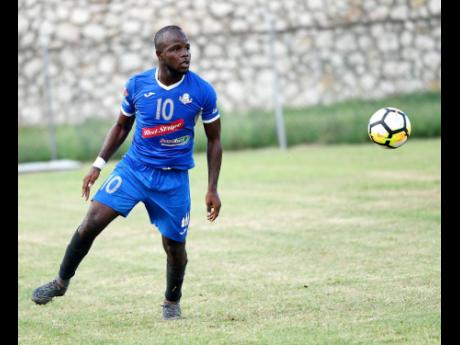 With his eyes fixed on the competition's Golden Boot award, national senior striker Javon East is also hoping to lead Costa Rican side Santos de Guaplies into this season's play-offs of the championships.

Only the top four will advance into the play-offs and the Guaplies are currently fifth in the standings on 23 points. They are six behind fourth-place San Carlos with four matches remaining in the preliminary round of the competition.

East, who is currently tied at the top of the goalscoring chart with Alvaro Saborio from San Carlos on 10, told STAR Sports that he has been working assiduously to ensure that his team make the play-offs this season.

"I am hoping to finish the season strongly and, hopefully, I will bring my team into the play-off of the championships and also win the Golden Boot," said East. Guaplies failed to make the play-offs last season after they finished ninth in the championships. "My aim is to score 15 goals in the league this season, and I am on track to achieving that," he said.

"It has been a good season so far because this is the first time that I am playing here and I am hoping to finish on a positive note."

East, who joined the club on loan from Portmore United, was joint top scorer in the Red Stripe Premier League last season with 12 goals. East, who signed a one-year loan deal with Santos de Guaplies in June, had played a vital role in helping Portmore to secure back-to-back RSPL titles in the last two seasons.

The 24-year-old East, who made his senior debut for the Reggae Boyz against South Korea in Turkey in 2018, added that he is now hoping that his performance in Costa Rica will help him to secure a contract in Europe.

"I think that this is a stepping stone for me to achieving bigger things in my career because my aim is to play in Europe," said the former Calabar High Manning Cup standout.