Whitmore looking to boost squad ahead of WC qualifiers 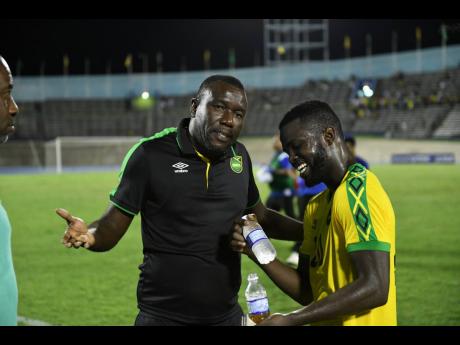 Jamaica’s coach Theodore Whitmore talks with Kemar Lawerence after the Reggae Boyz played The Cayman Islands at the National Stadium on September 9, 2018.

In an effort to increase the depth in the Reggae Boyz squad, head coach Theodore 'Tappa' Whitmore said he will be going on an all-out drive to recruit a number of players to fill some of the weak areas within the national side.

Whitmore told STAR Sports that the national side is lacking depth in a number of areas and so he will be taking all the necessary steps to ensure that he upgrades these positions ahead of the start of next year's FIFA World Cup qualifiers.

"What we want is depth in each position because if you recalled the last Gold Cup game when defender Damion Lowe was out, it caused a problem for us and once you can identify new players, then it will be good for us," Whitmore said.

"If you look we have Alvas Powell on the right side and we have Fabian McCarthy at the moment. If you look at central midfield and centre half those are areas that we are falling short in and we have to improve going into the next year where that is concerned."

The Reggae Boyz recently moved up to 45th on the latest FIFA ranking and third in Concacaf behind Mexico and United States.

This have put the country in a good position to qualify directly for the final round of the Concacaf World Cup qualifiers to begin next year.

The new format, which was made official in July, gives the top-six-ranked countries in the region automatic passage to the hexagonal round, in which three teams will automatically qualify for the 2022 World Cup to be held in Qatar.

Whitmore pointed out that he has already identified a number of overseas players who he will be looking to bring into the squad next year.