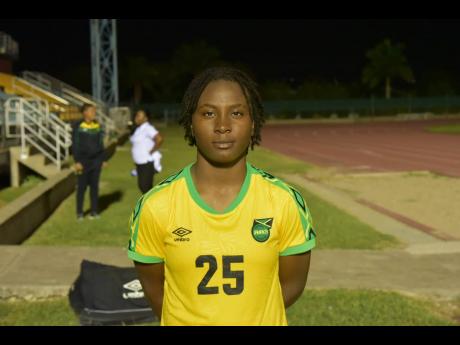 The talented 20-year-old footballer, who recently featured for the Reggae Girlz during their Olympic qualifiers, was stabbed to death by a friend in Half-Way Tree last Thursday night.

“We will be willing to assist if asked and if it is necessary. I am reaching out to the family and to the JFF (Jamaica Football Federation) to see what is in place and what role we can play,” said Grange.

“I am really saddened because she was a talented footballer and a member of the national squad,” she said. “I consider her killing senseless and it is sad when you see a brilliant footballer and obliviously a leader with a wonderful future whose life is being cut short so suddenly,” Grange said.

The defender, who played seven years for Excelsior High in the schoolgirl competition, also came through the ranks as a national player and was destined for greatness.

Go on a scholarship

The Reggae Girl, who played for and captained league leaders Waterhouse in the Women’s League, was also due to go on scholarship at Daytona College in the USA in January.

Clarke scored on her debut for the senior women’s team in their 12-1 victory over Cuba on September 30. She was a member of Reggae Girlz team to the Pan-American Games in Lima, Peru, in July.

Grange added that Clarke had a very bright future and she is really shocked at her passing.

“It is painful that she wasn’t even able to take up her scholarship that she was awarded to study at the Daytona College in Florida in the United States next year,” said Grange.

“She had a really great future ahead of her and I am really saddened by this,” she said.