High stakes! - Nunes, DaCosta to go all out as weekend culminates with Diamond Mile 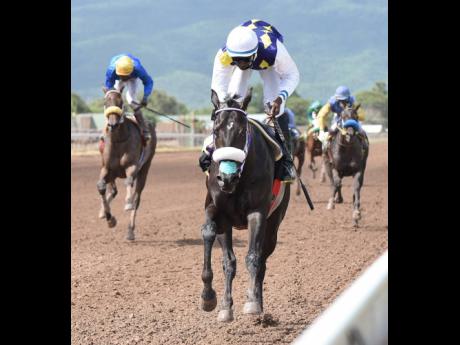 A WEEKEND of stakes battles starts on Friday with leading trainer Anthony Nunes and defending champion Wayne DaCosta set to sweep almost half of the day's 11 races, with $11m separating them, heading into Saturday's Diamond Mile meet.

Nunes has 14 runners on Friday's card, aiming to cushion Saturday's impact of DaCosta's unbeaten importee, STRANGER DANGER, super mare SHE'S A MANEATER and a host of stablemates, who could earn close to $10m in the Diamond Mile for the champion trainer.

DaCosta, who staged a famous comeback to seal an 18th title last year by throwing a stun grenade into Nunes' camp with five winners on the third-to-last race day, grabbing the lead, before using RUN THATCHER RUN to turn back his rival's army in the Jamaica Two-Year-Old Stakes, has stacked the programme with 13 starters.

The champion trainer appears to have the second and third races, six-and-a-half furlong events for two-year-olds, locked with imported debutant, UNCLE POLLY, and a Natural Selection-Geisha's Art colt, KING ARTHUR, respectively, eyeing close to $1m in stakes with other stablemates expected to pick up purse monies from both races.

Having acquired BIG BLACK NATION from the claim box for $250,000 as a winner on October 12, DaCosta has returned the six-year-old gelding to the same level, going five furlongs straight in the sixth, calling in apprentice Raddesh Roman to slip four pounds, riding at 119lb.

Whereas BIG BLACK NATION should bring in $327,600 for the champion trainer, in addition to other runners, who could round off his day at approximately $1.5m, Nunes' firepower starts from the seventh event, which he has loaded with four starters, including LATAPY, taking on Paul Charlton's imported ALHAMDULILLAH, ironically the mount of Omar Walker, DaCosta's go-to jockey.

Though LATAPY, an American Dance-Honeymoon Bay colt will be happier at a mile after being run off his legs by upsetter EL GRINGO's blitzkrieg of speed going a half-furlong shorter on October 12, and has finished ahead of ALHAMDULILLAH in three of the American's last four outings, a change of equipment by Charlton last time out must be noted.

Fitted with blinkers at five furlongs straight, ALHAMDULILLAH ran on into second place behind DaCosta's speedster, AMERICAN INVADER, beaten five lengths in a fast 58.1, the best he has stayed on in four starts.

Whereas the worst LATAPY should finish is second should ALHAMDULILLAH slip him, Nunes has a Gatlin of eight runners aimed at DaCosta, from the eighth to 10th event, led by Saturday's winner, PRINCE CHARLES, and EARN YOUR STRIPES in the seven-furlong Betting, Gaming and Lotteries Commission Stakes at seven furlongs, eyeing at least a total $1.5m, which would leave them just about square at day's end.

PRINCE CHARLES won like an out-of-class horse on Saturday, clocking 59.1 at five furlongs round, motoring from near the back of the 11-horse field after the first furlong to collar and sweep by speedy TREVOR'S CHOICE a half-furlong out, suggesting he should stay the six-and-a-half furlongs of the Supreme Ventures Diamond Sprint Trophy in a more relaxed pace.

Though DaCosta has mobbed the Betting, Gaming and Lotteries Commission Stakes with five runners to Nunes' two, the champion trainer's squadron will have to wish Nunes' EARN YOUR STRIPES well, running the ideal distance required of a Nuclear Wayne-Brown Sugar offspring, seven furlongs, after being dragged by improved ROY ROGERS and outfinished by a handicapped SEBASTIAN at nine furlongs and 25 yards last time out.