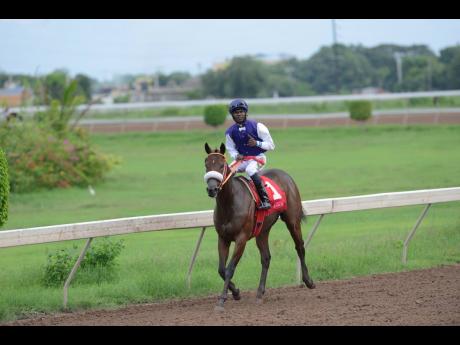 SHE’S A MANEATER, ridden by Omar Walker, wins the 41st running of the Superstakes at Caymanas Park in St Catherine on October 7, 2019.

IT's the clash racing fans have awaited, since last October, when debutant American STRANGER DANGER surprised even his own barn, it was said, to beat stablemate AMERICAN INVADER by a head, clocking 1:06.0 as a two-year-old.

Undefeated in nine starts, the now three-year-old, dark bay gelding, squares off in Saturday's Diamond Mile with stablemate SHE'S A MANEATER, unbeaten in her last five races, accounting for the Gold Cup and Superstakes on the trot, reportedly a rejuvenated mare since changing grooms in May.

Though a super mare in her own right, SHE'S A MANEATER's only real challenger for a while, apart from her odd off days, was WILL IN CHARGE, the last Diamond Mile winner, who she had used a five-pound sex allowance to beat by a short head in last year's Superstakes.

She won another epic battle against WILL IN CHARGE, by a neck, in May's Legal Light Trophy, at nine furlongs and 25 yards, again benefiting from a five-pound advantage, this time in a handicap. However, WILL IN CHARGE injured himself in June's Viceroy Trophy and has been out of training since, leaving grade one races at the mercy of SHE'S A MANEATER to gobble five in a row.

As it stands, defending 18-time champion, Wayne DaCosta, badly needs a one-two finish, worth $8.9m, in his $11m chase to deny rival Anthony Nunes his first trainers' title, which has created this afternoon's head-on collision between the country's top two horses after artfully dodging each other since September.

DaCosta's cul-de-sac has to do with him having interest in STRANGER DANGER, his wife listed as owner, whereas SHE'S A MANEATER, who missed out on what would have been a defence of her 2017 Diamond Mile title when bolting at the start last year, is owned by Ian Kong, whose father, Winston, has been with the trainer "before he was champion", the elder stated after the mare won a third Superstakes last month.

Therefore, the riding assignments, trusted and efficient Philip Parchment aboard STRANGER DANGER and Omar Walker, SHE'S A MANEATER's rider in all but two of her biggest victories, both due to injuries, being put aboard the mare, suggest a trainer giving his owner moral justice.

As flashy and classy as she is, SHE'S A MANEATER has never faced a foe such as STRANGER DANGER. Before outclassing three-year-olds, TOONA CILIATA and SENTIENT, in the 10-furlong Superstakes a month ago, seven-year-old ANOTHER BULLET and out-of-form mare, MONEY MAGNET, were her beating sticks in three consecutive races.

Apart from ripping up the exercise track in the mornings, there is nothing, in terms of performance, that SHE'S A MANEATER has laid down in a race that STRANGER DANGER hasn't proven that he can match or better.

His stakes record 1:36.3 in last month's Invitational Mile was under topweight 126lb, a ridiculous eight-length victory that more resembled a dozen lengths, Walker only having to remind him once, unnecessarily so, that he was in a race, about a furlong out.

Sit back, enjoy the ride and watch DaCosta pose for dual photos with both his charges in the winners' enclosure, satisfying wife, Elizabeth, himself and the Kongs at the same time, giving Nunes a $9m headache at day's end.