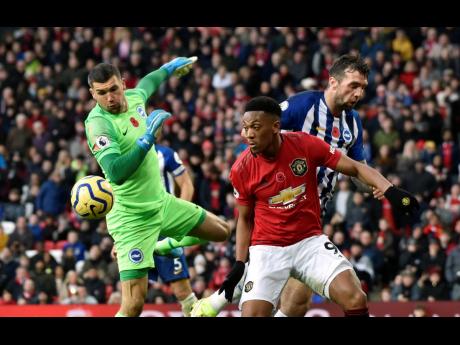 Marcus Rashford struck off the underside of the crossbar to complete Manchester United's 3-1 victory over Brighton in the Premier League yesterday.

Andreas Pereira put United ahead in the 17th minute before Davy Propper scored an own goal inside two minutes. Rashford netted in the 66th just after Lewis Dunk had reduced the deficit as United rose to seventh in the standings.

Brighton never looked like securing their first-ever win at Old Trafford, where Scott McTominay's serious-looking injury late on was a concern.

It was a better afternoon for fellow academy graduate Brandon Williams, who left to a standing ovation after impressing on his first Premier League start.

United showed few signs of fatigue after beating Partisan Belgrade in the Europa League on Thursday and unnerved the Brighton backline from the outset.

Rashford was unable to follow a superb, weaving run with a fitting finish with the hosts' first clear-cut chance, but Ole Gunnar Solskjaer's side would make the breakthrough in the 17th minute.

Victor Lindelof and Fred were involved in a move that ended with Andreas Pereira racing through the middle.

Dale Stephens' tackle looked to have ended that attack, only for the ball to fall kindly for Martial, with the Frenchman cutting back for the Brazilian to hit a strike that went in off the Brighton midfielder.

Matters would soon get worse for Graham Potter's side after Dunk was booked for a late, clumsy challenge on Daniel James. Fred produced a fine delivery from the resulting free kick, leading to a bundling McTominay effort being prodded over the line by Propper.

The VAR checked Harry Maguire's involvement, and 140 seconds after the ball crossed the line, Old Trafford were able to celebrate fully.

It was a rare set piece goal by United against an Albion side looking far more threatening from dead balls.