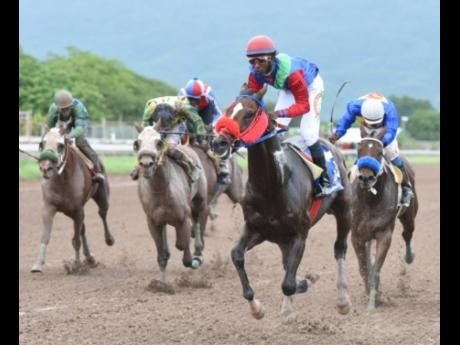 SUPERLUMINAL (second right), ridden by Omar Walker, finishes ahead of BRUCE WAYNE and DONTAE to take the Fontainbleu Trophy at Caymanas Park on Saturday, October 19, 2019.

Former champion jockey George Hosang said local riders should consider plying their trade overseas to earn a much better living from horse racing and to improve their craft.

Hosang, who is rated as one of the best jockeys to have ever ridden at Caymanas Park, won four consecutive jockey's championships between 1972-1975. He won 642 races on local soil and 1,395 in North America.

Hosang told STAR Sports that there are a lot more opportunities now available to Jamaican jockeys on the North American circuit and they should go after them to better themselves.

"It is a shame that we have once a week racing and for that many jockeys to survive," Hosang said. "It is hard to survive because it is only a handful of races for so many riders, so I would advise the riders if they get a chance to go abroad.

"I think they should go to the United States and ply their trade there because there are a lot of opportunities there.

"They can gallop horse and make good money by just galloping horses in the morning in the US. I know that there are good riders here that are not getting enough rides."

Hosang, who is now residing in the US, said that the standard of riding has improved over the years because many jockeys are taking their trade seriously.

"I think the riding is much improved because right after the races, they have re-runs where the riders and trainers can see how the horse really performed," Hosang said.

"Back in my day, you have none of that. It was only the stewards' cameras, which was in black and white and not very clear. To see one self ride is a lot of progress for the industry. The racetrack looks fine to me and I really think the managing director is doing a fantastic job."

Hosang was among three former champion jockeys who were honoured at the Triple Champions Awards Dinner, which was held last Thursday night at the AC Hotel in Kingston.