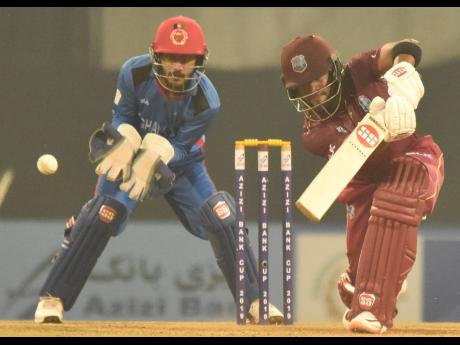 Windies batsman Shai Hope (right) drives for four on his way to an unbeaten century as Afghanistan wicketkeeper Ikram Alikhil looks on during their third and final one-day international match at the Atal Bihari Vajpayee International Stadium in Lucknow, India, yesterday. Hope won the Man-of-the-Match award. 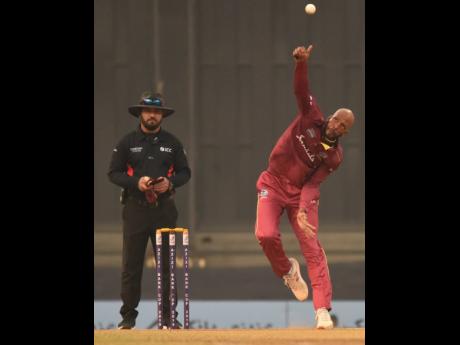 Windies bowler Roston Chase (right) bowls a delivery as umpire Ahmed Shah Durrani looks on during the third and final one-day international match against Afghanistan at the Atal Bihari Vajpayee International Stadium in Lucknow, India, yesterday. Chase was named Man of the Series.
1
2

Elegant stroke-maker Shai Hope carved out a seventh one-day hundred as the Windies completed a rare series whitewash with a five-wicket victory over Afghanistan in the third one-day international yesterday.

In pursuit of 250 for victory at the Atal Bihari Vajpayee International Stadium, the Windies recovered from a nightmare position of four for two in the third over to reach their target with eight balls to spare.

At the heart of the effort was Hope's enterprise. The 26-year-old striking a Man-of-the-Match unbeaten 109 off 145 deliveries to control the run chase. The knock saw him end the series with 229 runs at the same average, and move his career average to 50.

Roston Chase, adjudged Man of the Series for his tour average of 72 and six wickets, finished on 42 not out off 32 deliveries, while Brandon King hit 39 from 56 balls and captain Kieron Pollard, a quick-fire 26-ball 32.

The result was still somewhat in the balance at 182 for five in the 38th over but Hope and Chase put all doubts to rest in a 71-run, unbroken sixth-wicket stand.

Afghanistan had earlier managed their best total of the series when they rallied to 249 for seven off their 50 overs, behind Asghar Afghan's top score of 86 and an unbeaten 50 from Mohammad Nabi.

Opener Hazratullah Zazai belted a lively 50 off 59 balls, while Najibullah Zadran chipped in with a busy 30 off 32 balls down the order.

The hosts were languishing at 118 for five in the 29th over after seamer Keemo Paul (3-44) hurt the innings with an incisive burst but Asghar and Nabi put on 127 for the sixth wicket, giving Windies their first real challenge of the series.

Circumspect early in his innings, Hope reached his fifty off 76 balls in the 27th over by punching seamer Yamin Ahmadzai to the cover boundary and completed three figures off 133 deliveries in the 44th over, with the Windies all but assured of victory.

When Pooran holed out to long off in the 29th over, the Windies were facing a required run rate of nearly six an over but Pollard entered to crunch a four and a pair of sixes in a 63-run, fifth-wicket partnership with Hope, which put the visitors in command.