The end of the road for the ‘Light Blues’ 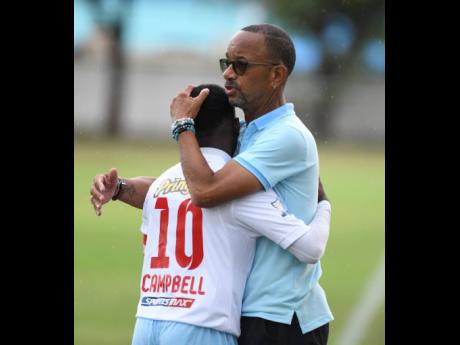 St George's College saw their ISSA/Digicel Manning Cup campaign came to an end yesterday after failing to beat Excelsior High school in their final Group H quarter-final game at the Ashenheim Stadium on the grounds of Jamaica College.

The game ended in a 1-1 draw and even though St Andrew Technical High School (STATHS) beat Jamaica College 2-1 at Stadium East field, the 'Light Blues' will miss out on the semi-finals having an inferior goal difference to JC.

Assistant coach Marcel Gayle said that his side lost concentration which led to the equaliser. "There was a lapse in concentration coming after a hard weekend (in the ISSA Champions Cup). We just have to go back to the drawing board, look where we went wrong and fix it for next year," he said.

Excelsior technical director Leebert Hailman said that rough season caught up with his players in the end.

"It was a difficult game. We were playing back-to-back games and my team just couldn't cope. But we gave it our best shot," he said.

Both teams entered yesterday's game needing a win to advance and hoping that JC drop points against STATHS in the other game.

The first half was a tense affair with both teams finding it difficult to generate clear-cut chances. It wasn't until the 28th that St George's found the breakthrough. Shemar Booth received a great pass on the right hand side and his low cross from Campbell who fired home from close range.

Excelsior's best chance in the first half came from first half substitute Jhevan Smith who managed a shot on target but the effort went right to St George's Orivile Smikle.

The second half started more aggressively by both teams. Excelsior managed to carve their best chance of the game as substitute Daniel Clarke found Smith and his shot on the right side forced Smikle into a save.

George's should have doubled their lead in the 67th minute when Jamone Shepherd found Chantomoi Taylor and was clear on goal but his shot went wide.

It was an opportunity that he would rue as Excelsior found the equaliser in the 76th minute as George's managed to clear only as far as Clarke, whose shot inside the area managed to trickle pass Smickle.

As the result at Stadium East became known, both teams went on a final push for the winner but neither could find the net as time expired.

In the second game of the double-header, Group G hopefuls Wolmer's Boys School were leading Charlie Smith High School 3-0 at half-time when persistent rainfall and a waterlogged field lead referee Carvel Baton to call off the game until further notice.

Defending champions Kingston College came from behind to beat Camperdown 2-1 to secure their passage to the semi-finals.