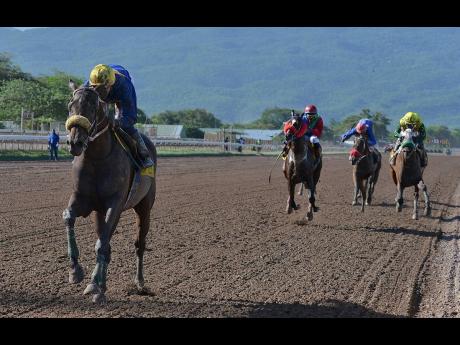 BIGDADDYKOOL, ridden by Ryan Lewis, wins the Prime Minister’s Stakes ahead of Superluminal and Dontae at Caymanas Park on Saturday, August 10, 2019.

It has been more than two weeks since the death of former Superstakes winner BIGDADDYKOOL. However, his groom Lewisito DaCosta is still trying to come to terms with the sudden death of the six-year-old gelding.

BIGDADDYKOOL, who was conditioned by trainer Anthony 'Baba' Nunes, died on October 28, after finishing his workout at Caymanas Park. This was just more than a week before the Diamond Mile, where he would have been one of the main contenders in the event.

Nunes said he was shocked by the death of his horse because he was a very good animal to him.

"My mother died and I didn't feel as bad as how I felt about this horse," DaCosta said. "Believe me, I know that if I had him to run in the Diamond Mile, I must have earned because he couldn't have run less than fourth in the race.

"I was really sad about this because this horse was a part of my family and l loved him," DaCosta said. "I love this horse bad because the way how I feel when he died, only God knows, because I was sad for a whole week and I could hardly eat.

"He was a good horse and if he didn't die, next year would have been a good year for him."

The 65-year-old DaCosta, who has been a groom since 1978, had been taking care of BIGDADDYKOOL for the past seven months, having made the switch from rival trainer Wayne DaCosta. He pointed out that despite his age, he plans to continue in the sport as long as possible.

"I know I will recover because I am a good groom and you can ask anybody about me," he said. "I love to take care of the horses because whenever I prepare them and the trainer put them out to run, they have to come good to beat my horses."