Garvey Maceo have one foot in final - ... as rain suspends semi-final with STETHS 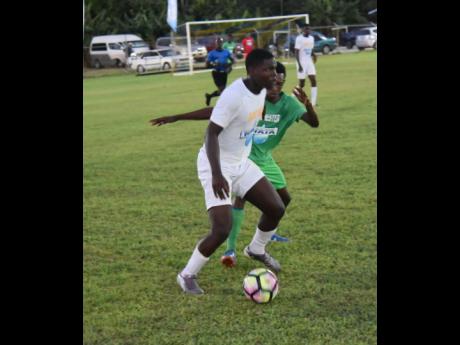 Jevaughn Maxfield of Garvey Maceo High School (front) shields the ball from Larry Maitland of Manchester High School during the final of the STETHS Cup at STETHS Sports Complex in August 2019.

Garvey Maceo has one foot in the finals of the ISSA Ben Francis Knockout Cup after leading St Elizabeth Technical High School (STETHS) 1-0 after 40 minutes when weather conditions forced hauled of play in the second semi-finals at the Juici Patties field in Clarendon.

The remaining 55 minutes will be played early next week at the same venue.

STETHS had just started to get a hold on the game but referee Andre Farquharson was forced to suspend play due to lightning and a waterlogged field.

There was a similar situation at last season's final at the same venue as the second half had to be played another day.

Coach of Garvey Maceo, Merron Gordon, who is happy for the stoppage, said he is confident of getting the better of STETHS over the remaining 55 minutes.

"I'm pretty confident but it's going to be a tough remainder of the game. We have 55 plus minutes of football to play so we just have to remain focused and push for another goal. I don't think a one-goal lead is good enough to contained STETHS," Gordon said.

" I think this did well for us because STETHS were getting the better of play in terms of the condition when the rain started to fall. We will just regroup and come again with a great push," he added.

Omar 'Rambo' Wedderburn, coach of STETHS, said despite the rain breaking their momentum, he is confident they can turn things around when the game continues.

"Yes, we are confident because this is a do-or-die situation, so we will have to give it our all. I think we realised a bit too late that we need to be more positive about what we are doing. I think we now have the understanding that we can use to go forward," Wedderburn said.

"We just seated to develop a momentum and the rain stopped that. However, it is a work of God and we won't complain but we are going to come back with our all."

In the first semi-final at the same venue, B. B Coke defeated Manchester High 2-1 to book a spot in their first ever finals. The final is set for Thursday, November 21.