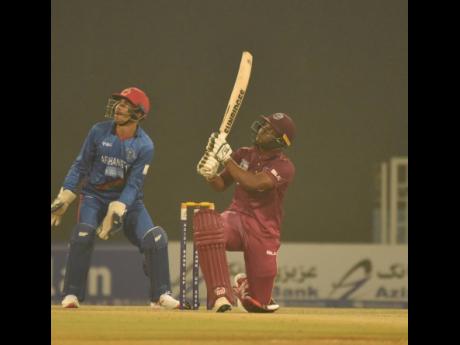 Opener Evin Lewis (right) smashes a big six in his 68 off 41 balls during the Windies 30-run win over Afghanistan in their T20 International match at the Atal Bihari Vajpayee International Stadium in Lucknow, India, yesterday.

Opener Evin Lewis struck a trademark aggressive half-century while seamer Kesrick Williams marked his first appearance for West Indies in 16 months with a three-wicket haul, as the Caribbean side swept aside Afghanistan by 30 runs in the opening Twenty20 International here Thursday.

Sent in at the Atal Bihari Vajpayee International Stadium, West Indies lacked fluency but still gathered 164 for five off their 20 overs with Lewis lashing 68 off 41 deliveries and captain Kieron Pollard getting an unbeaten 32 off 22 balls at the end.

In reply, the hosts never really threatened and were limited to 134 for nine off their 20 overs, to fall behind in the three-match series.

Najibullah Zadran (27), Asghar Afghan (25) and Fareed Ahmad (24) all got starts but failed to carry on as the West Indies bowlers struck at regular intervals to unsettle the innings.

Williams proved exceptional with his variations in finishing with three for 17 from his four overs while Man-of-the-Match Pollard (2-17) and leg-spinning Hayden Walsh (2-34), on his T20 debut for West Indies, supported with two wickets apiece.

Looking to extend their dominance from the ODI series whitewash, West Indies made a less than stellar start when debutant Brandon King (4) tried to cut one from off-spinner Mujeeb-ur-Rahman and was bowled off the fourth ball of the innings.

Lewis then took charge, however, pummeling four fours and half-dozen sixes as he dominated an 87-run second wicket stand with fellow left-hander Shimron Hetmyer whose run-a-ball 21 was sedate by his standards and included just one six.