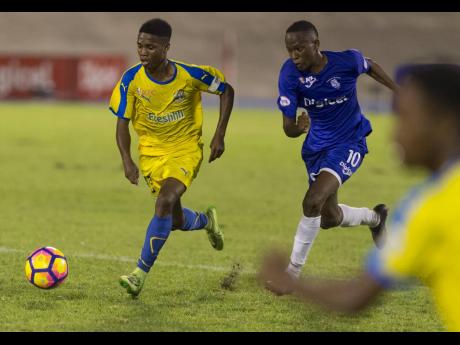 Clarendon, who are the reigning ISSA/Wata DaCosta Cup champions, will face KC, who are looking to rebound from their ISSA/Digicel Manning Cup semi-final defeat to rivals Jamaica College on Wednesday.

The Lenworth 'Teacha' Hyde-coached Clarendon are scheduled to defend their daCosta Cup title against Dinthill Technical in the final next week.

Clarendon, who are seeking to win the Champions Cup title for the first time, secured their spot in the final with an easy 3-0 win over Cornwall College, who won the competition last year.

On other hand, KC booked their place in the final with exciting 3-2 penalty shoot-out win over last year beaten finalist, Jamaica College. This, after both teams had played out 1-1 draw at full time.

Hyde, who was the head coach of KC in the 2014-2015 season, said he is expecting a very competitive game from his opponents but he is confident that they will come out victorious.

"We are expecting a good game from KC, but we know what we have to do to win this title," said Hyde. "This is a title that we want to win and so we are going out there to play our best brand of football and ensure that we win the game,' he said.

"We are confident, but we don't want to be over confident and so I just want my players to be calm and play the simple football," Hyde stated.

Clarendon will rest their hopes in the hands of leading scorers Sheldon Smart, who has netted 13 goals this season along with Rodrick Graville with 10.

They are expected to receive support from Dane Chambers, Earl Simpson, Richard King and Tajay Williams.

Meanwhile, assistant coach of KC, Raymond Watson, said: "We are taking this game very seriously. We are very disappointed that we didn't advance to the Manning Cup and actually getting a chance to defend our Manning Cup title."

He added: "We have nothing to lose and nothing to fear and so we will go out there blood sweat and tears and just lay everything on the line." KC will be led by striker Dwayne Atkinson, who has scored 18 goals this season.

He is expected to receive support from Tyrese Williams, Ronaldo Robinson, Lewis Watson and Jamari Morrison.

The last time the two teams meet, Clarendon College got the better of the boys from North Street in the Olivier Shield match last year with a brilliant goal from Andre Nicholson.