Earn Your Stripes should use his class to prevail 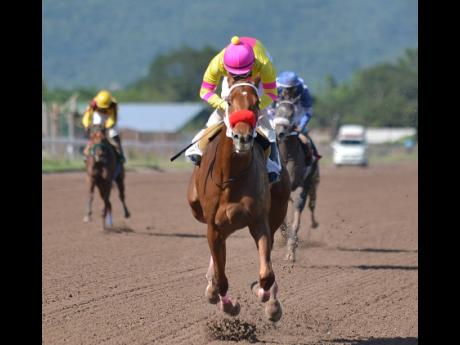 E ARN YOUR STRIPES lost two tough races, 17lb against him when beaten by SEBASTIAN, and afterwards outrun by a reprogrammed foreigner and new stablemate, seven-furlong specialist, LEGALITY, last time out.

A two-and-a-half week break between races, his third run within five weeks, two months after returning from a jam-packed classic season, EARN YOUR STRIPES played the hand he was dealt the only way he could have, going down in stirring finishes, beaten by a length and a quarter on both occasions.

Renewing rivalry with SEBASTIAN, EARN YOUR STRIPES reports with a 15lb weight swing in his favour. Philip Feanny, who had used super-light female claiming apprentice, Samantha Fletcher, who rode SEBASTIAN at 106lb to beat EARN YOUR STRIPES with 123lb at nine furlongs and 25 yards, has opted for Omar Walker at 122lb for Saturday's rematch after his charge had only prevailed by a little more than a length.

Meanwhile, ROY ROGERS, who had run his heart out at odds of 28-1 that day, taking EARN YOUR STRIPES out of his comfort zone on the lead, carrying the field almost to the furlong pole, might have paid a price for that mammoth effort, uncharacteristically slowly into stride for his next race and getting caught in traffic along the rail, finishing sixth behind PRINCESS AVA, CRYPTOCURRENCY and TRICKY ONE at six and a half furlongs.

SEBASTIAN is too heavy to keep EARN YOUR STRIPES honest on the lead, leaving ROY ROGERS as the possible pacesetter. Shane Ellis has been recalled by Anthony Nunes, who had used apprentice Christopher Mamdeen aboard EARN YOUR STRIPES when beaten by stablemate LEGALITY.

EARN YOUR STRIPES lost to LEGALITY in a fast 1:25.0, sitting seven pounds off the foreigner, a race run in cracking splits of 23.1, 45.4 and 1:10.3, initiated by horses with no chance of winning, JAMAI RAJA and SERGEANT RECKLESS, yet still hung around to lose in a driving finish.

Though Nunes has opted not to use a claiming rider, unlike Dennis Lee, who has gone for useful Roger Hewitt aboard ROY ROGERS to try slipping EARN YOUR STRIPES, a duel on the lead should suit Ellis' mount.

EARN YOUR STRIPES a veteran of the classic campaign, fourth in the Governor's Cup and St Leger, should use his class to stalk any pace ROY ROGERS might attempt and still have enough in the tank to get home from the run-on horses, SEBASTIAN, TRICKY ONE, BIG BANG and SHE'S IRIE.