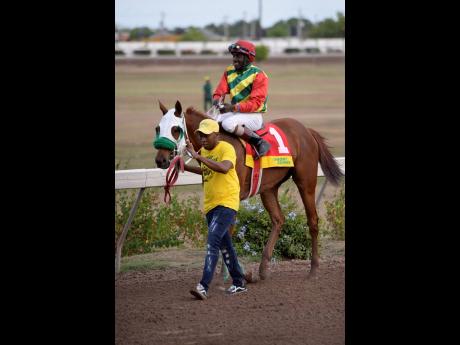 TOONA CILIATA, the most improved three-year-old coming out of the classic season, second in the Superstakes and third in the Diamond Mile, relegating his Triple Crown-winning stablemate, SUPREME SOUL, to the also-rans, leads Anthony Nunes' rally in the trainers' championship race on Wednesday.

At end of day, Nunes, who had started the afternoon with a $5.25m lead, saw his advantaged whittled to $4.79m, to which he is set to respond on Wednesday with a possible three-timer - ROHAN KABIR, TOONA CILIARA and the claimer SIR FREDERICK in the night pan.

Canada-based Dane Nelson is aboard ROHAN KABIR in the sixth event at nine furlongs and 25 yards, running out of Nunes' barn for the third occasion since acquired from Richard Azan. The three-year-old gelding has certainly improved, looking better with each run and far more active at exercise.

In both races out of his new barn, ROHAN KABIR faced stablemate LATAPY, who had him three lengths behind on either occasion. First, it was upsetter EL GRINGO, who took out both Nunes horses with a gate-to-wire victory before LATAPY franked the form by beating late-charging PURPLE WAYNE on November 8.

ROHAN KABIR ran really well for third, always prominent before losing second to PURPLE WAYNE, who closed from off the pace at a mile, running wide into the lane. PURPLE WAYNE returns for the rematch but has picked up 11lb, sitting at the top of the scale with 126lb, making his job of closing under the big weight a tall order, whereas ROHAN KABIR is bound to be in the pace, running two pounds lighter than his rival.

Watch out for Azan's MILKMAN, who ran well the second time among non-winners-of-two, gaining on EXTRUDER at six and a half furlongs. However, the grey gelding sits level with ROHAN KABIR, and only two pounds off PURPLE WAYNE, after picking up five pounds from his second-place run among lesser horses.

Nunes trump card is TOONA CILIATA in the memorial event run in honour of his late father, Nigel B Nunes. The leading trainer has three runners accompanying TOONA CILIATA - HOUDINI'S MAGIC, DONTAE and FAYROUZ - as he seeks to maximise earnings against DaCosta, who has sent out SUMMER SUN and HOVER CRAFT in the nine-furlong and 25 yards open allowance event.

Nunes snapped up nine-year-old SIR FREDERICK for $250,000 on November 9. In his previous race, SIR FREDERICK had placed fifth behind DaCosta's RADICAL, on a $350,000 tag, at five furlongs straight, prompting the pace to the furlong pole.

Down in class on a $180,000 tag, going four furlongs straight, Nunes has avoided topweight 126lb by calling in nine-pound claimer, Shane Richardson, breaking from stall 14 aboard possibly the biggest favourite of the day.