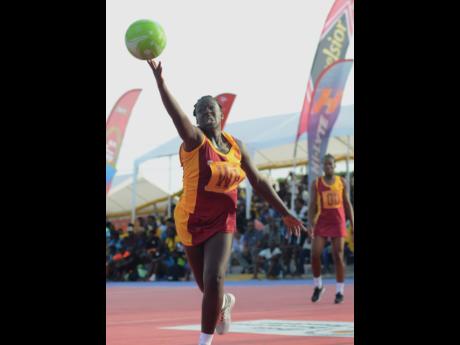 Defending double champions Denbigh High stayed on course to retain their titles as both junior and senior teams were victorious in their semi-final matches of the ISSA Rural Area Schoolgirl Netball competition played at the GC Foster College of Physical Education and Sport on Tuesday.

Both teams had decisive wins over their opponents as the juniors first stopped Manchester High 32-23 before the seniors overwhelmed Porus 46-28. Glenmuir juniors stopped Green Pond 39-23 and Holmwood seniors had a 54-21 win over Manchester High to join Denbigh in the final.

Denbigh coach Janice Walker is elated that her teams have reached their sixth rural finals in a row.

"The girls were great and I am very confident that both teams will go all the way," she said. ''We will not be taking anything for granted as both of our opponents did well to reach the finals. After dethroning Holmwood for the senior title last year, I know they will be coming all out for us this time around, but we are ready for the challenge."

Holmwood coach Carline Graham-Powell attributes the win to her team's quality and experience.

"We were always confident that we were going to win our match as this is a very experienced and quality team," she said. "We have several members of the Under-16 national and development teams who are playing for this team."

Graham-Powell has no fear of the Denbigh team and is predicting victory.

''We have been in this position many times, and after a blunder last year we have fixed that and we are ready to reclaim our title and we have no doubt here," she said.

For Glenmuir, it was a historic occasion as it was the first time they have advanced to the final of the competition, but coach Ryan Reid was not surprised.

"I am extremely proud of our girls, as this is historic for the school, but we are not surprised because most of these girls were on the team that won the ISSA Under-14 title earlier this season," he said.

Glenmuir have defeated Denbigh by two goals earlier this season, but he is not getting too excited.

"We have defeated them earlier this season but we expect a tougher game from them playing in the finals, but we will be ready for the challenge," he said.

The finals are set for next week Wednesday.