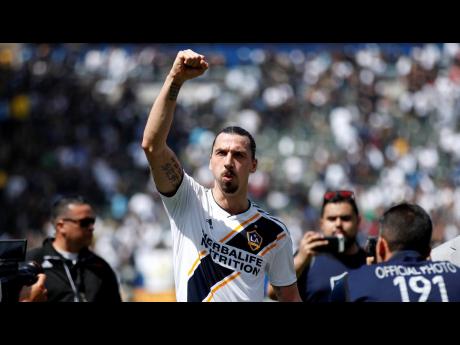 Zlatan Ibrahimovic's legacy at Malmo, the Swedish football team where he started his illustrious career, looks to be in tatters after he bought a stake of nearly 25 per cent in one of its biggest rivals.

Sweden's biggest sports star outlined his desire to make Hammarby the "best in Scandinavia" after becoming a part-owner of the Stockholm-based club in his first move into football ownership.

"There are no limits to how big Hammarby can be," Ibrahimovic told Swedish tabloid Aftonbladet in its Wednesday edition after the deal was announced.

His decision to invest in Hammarby has gone down badly at Malmo, where a golden statue of Ibrahimovic was unveiled outside their stadium last month.

A toilet seat was placed around one of Ibrahimovic's arms on the statue early yesterday, a plastic bag put over his face and his name was covered up, leading to the monument requiring police protection during the afternoon.

Social media videos appeared to show fans lighting fires at the base of the statue in the evening, while a racist message had reportedly been spray-painted next to it.

Malmo fans are angry not just that Ibrahimovic wants to make another club better than his boyhood team, but that he also said he didn't think Malmo supporters would be disappointed at his choice.

"A betrayal became a betrayal and a provocation," Kaveh Hosseinpour, vice-chairman of Malmo's official supporters' group, told The Associated Press. "So he basically stuck a knife in our backs, and then he came along with a sword and chopped off our heads."

Hosseinpour blasted Ibrahimovic for thinking he was "above criticism, that he is above Malmo FF and our feelings just because he is Zlatan."

"The statue is completely worthless now, just a piece of junk," Hosseinpour said. "The best way to solve that was if it was removed and put somewhere in Stockholm or something.

"Every game we go to, we are going to pass Zlatan knowing that there is a statue of an investor in Hammarby, not the statue of the football player Zlatan Ibrahimovic anymore."

The 38-year-old Ibrahimovic has acquired half of the 47 per cent stake in Hammarby owned by Anschutz Entertainment Group, the US-based company whose portfolio of sports teams it owns or has investments in includes the Los Angeles Galaxy - the Major League Soccer team where Ibrahimovic played for the past 18 months.