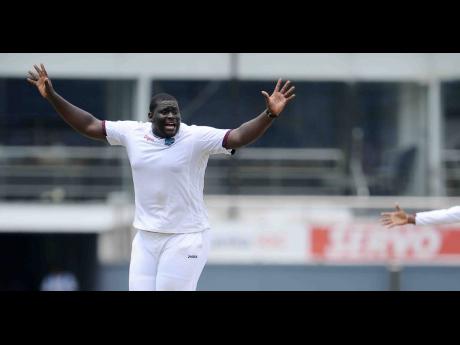 Shamarh Brooks struck a maiden Test hundred and Rahkeem Cornwall became the first West Indies spinner to claim a 10-wicket match haul on the subcontinent, as the Caribbean side dominated day two of the one-off Test against Afghanistan on Wednesday to put themselves on the verge of a comprehensive victory.

On another bowlers' day at the Atal Bihari Vajpayee International Stadium when 14 of 15 wickets fell to spinners, West Indies managed to secure an important 90-run lead, after being dismissed for 277 in their first innings.

Brooks, unbeaten overnight on 19, faced 214 balls and counted 15 fours and a six to complete three figures in his third Test after making his debut last August against India in the Caribbean.

Left-handed opener John Campbell, resuming from 30, made 55 - his maiden Test half-century in his sixth match at this level - while wicketkeeper Shane Dowrich chipped in with 42 in his first Test appearance in nine months following injury.

Cornwall then snatched three for 41 and fellow off-spinner Roston Chase, three for 10, as Afghanistan ended the day on the ropes on 109 for seven - a lead of only 19 runs ahead of Friday's day three.

First innings top-scorer Javed Ahmadi led again with a polished 62 as the hosts cashed in on the early overs of seam to coast to 53 without loss.

Once Cornwall was introduced, however, Afghanistan declined quickly to lose seven wickets for 56 runs.