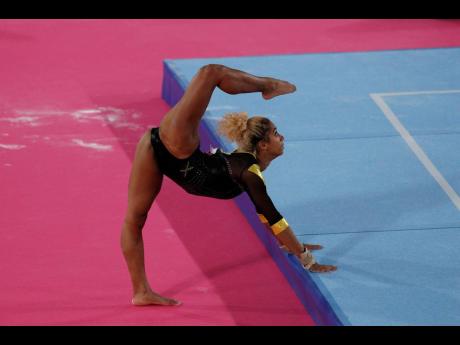 Jamaica’s Danusia Francis stretches before competing on floor in the women’s gymnastics qualification and team final at the Pan Am Games in Lima, Peru, on July 27, 2019.

President of the Jamaica Gymnastics Association Nicole Grant-Brown says that the success of Danusia Francis has inspired local gymnasts to follow in her footsteps.

The British-born Francis, who started competing for Jamaica in 2015, has been having a remarkable year, highlighted by her successful qualification to the 2020 Olympic Games in Tokyo after a stellar performance at the 2019 World Artistic Gymnastics Championships in Stuttgart, Germany, in October.

Grant-Brown expressed her delight at the 25-year-old's remarkable achievement and says that her success has re-enforced her commitment to the future development of the sport in the island. "She has been at it for a while and we are so happy that she has made it on her own merit because she has worked so hard and she has definitely shown that she is committed to Jamaica and Jamaican gymnastics," she told STAR Sports.

Francis will be a special guest at the National Gymnastic Trials for Senior and Juniors being held at the new National Gymnastics Training Centre on Saturday and Sunday, where she will be performing her routine for the young competitors and participating in the opening of the new facility at Slipe Road. Grant-Brown says that athletes from across the country will be arriving in Kingston just to see her and hopes that it can further motivate them to future success.

"The gymnasts, they are all followers and everything she does they come to the gym and try to show it off even if they can't do it. A lot of them are coming from as far as Montego Bay to see her. It has really inspired so many of them because they really love her," she said.

"It only motivates us now to consistently work to keep them on the right path."