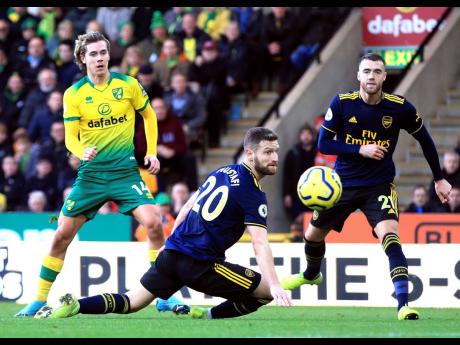 Arsenal started life after Unai Emery with a 2-2 draw at Norwich in the Premier League on Sunday that extended the Gunners' winless run to eight games in all competitions.

Interim manager Freddie Ljungberg insisted that he would try to put smiles on the faces of Arsenal fans again, but his team would have left Carrow Road with a defeat had the Canaries not wasted several opportunities in the second half.

Pierre-Emerick Aubameyang's double three days after Emery's departure did little to lift the mood, with this encounter highlighting the problems facing the club's former midfielder in their fight for a top-four finish.

"I was proud and honoured to be allowed to stand there on the touchline and lead this great club," Ljungberg said, adding that he thinks the top four is still a reasonable target.

"We started extremely well. I thought we dominated it totally and found pockets and created chances. I probably expected us to take the lead and go from that."

Norwich manager Daniel Farke would have been proud of his side but left with mixed emotions following an entertaining contest with VAR heavily involved.