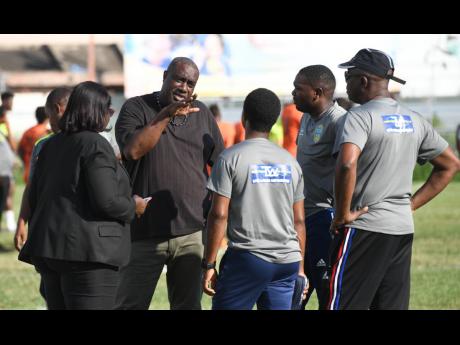 Head of the Referee's Department for the Jamaica Football Federation (JFF) Victor Stewart says that nothing will stop Red Stripe Premier League games from taking place despite a number of officials failing to report for duty in their respective fixtures yesterday.

A total of 10 officials were absent from yesterday's games resulting in the JFF dispatching replacement referees to cover the afternoon slate, with the feature game between Tivoli Gardens and Waterhouse being postponed due to only two officials being present. The sudden absence of the referees is in tandem with the failure of payment of outstanding monies owed by the Premier League Clubs Association (PLCA) to the referees. But Stewart confirmed that the association satisfied their obligations, however, the payment was made late and the misunderstanding from the referee's standpoint led to the action being taken by the officials.

"The issue is that the referees had a misunderstanding regarding payment. The PLCA was late in their payment but they did make their payment and we have to give them kudos for that," he told Star Sports.

He confirmed that replacements were being dispatched in order for games to be played as planned. While the rest of the afternoon's fixtures went as planned, the game at the Edward Seaga Sports Complex was postponed because the replacement officials did not show up in time for the 3:20 p.m. deadline set by match Commissioner Elaine Walker-Brown as the facilities did not have lights and would run the risk of playing in darkness.

"Some people take it up on themselves and decided not work today. The fact is at least 10 people pulled out on me. I had to full out with some replacements."

"By the time I realised that the referees who were assigned did not honour their appointments, I tried to find replacements. They reached the game at 3:20 p.m., at 3:30 p.m. the commissioner decided to call off the game.

However, the confirmation of payment still did not prevent the situation of officials not reporting to their respective games from happening. Stewart said that there were discussions with his office and the PLCA regarding possible action and vowed that once Premier League matchers are scheduled, they will do what they have to for the games to be played.

"If a referee decides not to ref for whatever personal reason, I will find referees with or without money. We cannot be selfish in our thinking because have to service the public, the sponsors and everybody and the great equaliser is football."

Stewart said that he doesn't foresee any further complications as yesterday evening's game between Habour View and Cavalier SC went off as scheduled and that a full crew is ready to officiate tonight's clash between Arnett Gardens and Mount Pleasant FA at the Anthony Spaulding Sports Complex.