Messi magic sends Barca back to the top 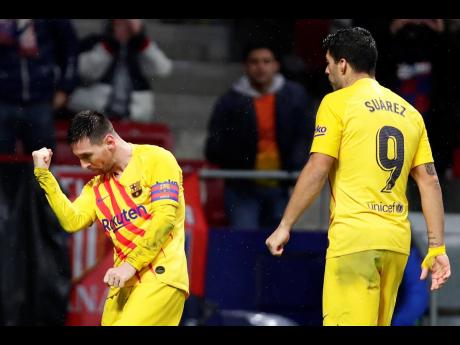 Lionel Messi made up for a lacklustre performance by scoring in the 86th minute, giving Barcelona a 1-0 win at Atletico and extending the Catalan team's unbeaten run against the Madrid rival to 19 league matches.

"It's always a big advantage to have Messi in even games like these," Barcelona coach Ernesto Valverde said.

Messi struck with a low left-footed shot from outside the area after being set up by Luis Suarez to keep Barcelona unbeaten against Atletico for nine years.

"We played a great match, but when Leo shows up he can make a difference," Atletico forward Saul Niguez said. "It's incredibly easy for him to do these things, that's why he is the best."

It was Messi's 30th career goal against Atletico, which hadn't lost at home in 17 matches in all competitions.

"Messi appeared out of the match for a long time, but when he had a chance he broke free and scored a great goal," Atletico coach Diego Simeone said.

The victory puts Barcelona back at the top of the league above Real Madrid - which won at Alaves on Saturday - on goal difference.

Atletico dropped to sixth place, six points behind Barcelona and Real Madrid which have a game in hand after their October clasico was postponed until Dec. 18 because of a separatist rally in the Catalan capital.