Campesino can’t be ‘Reckless’ on Friday 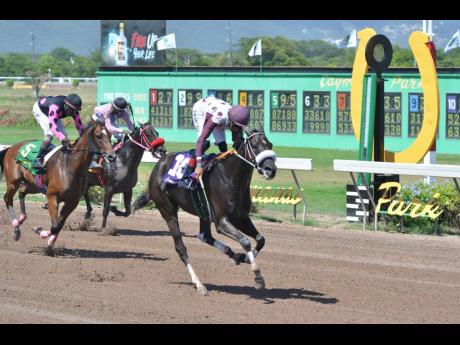 SERGEANT RECKLESS' last race at five furlongs straight, carrying the exact weight she will shoulder in Friday's ninth event at the distance, far better drawn on this occasion, suggests she will be a tough horse to beat, but apprentice Raddesh Roman still has to keep an eye on oldtsager CAMPESINO, who has a 10lb swing to his advantage in the overnight allowance event.

Terribly drawn at post-position on September 25, four-year-old SERGEANT RECKLESS ran her heart out against ultra-consistent RAS EMANUEL, forcing Omar Walker to pull out all the stops aboard the seven-year-old horse, who was down in class from open allowance after placing third behind upsetter ZEPHYR and ANOTHER VIGOROUS at five and a half furlongs.

SERGEANT RECKLESS had the handicaps in her favour, 109lb to RAS EMANUEL's 126, but it was still a valiant effort under the circumstances, beaten by a short head in a lightning-fast 58.0, a full second quicker than the 59.0 PEKING CRUZ had posted to land division one.

Having shown vast improvement since acquired from trainer Philip Feanny, the Storm Craft-Code Star filly prompted the pace of her last three races but was always fodder for run-on horses such as BRUCE WAYNE when going six and a half furlongs last Saturday.

Brought back rather quickly by champion trainer Wayne DaCosta in his bid to help reduce a $5.1m deficit behind leader Anthony Nunes, SERGEANT RECKLESS gets an ideal distance and can't complain about stall eight in a 10-horse field.

CAMPESINO, now drawn next to SERGEANT RECKLESS, had also featured prominently on Saturday, sitting in the pace down the backstretch and into the lane, but couldn't match the filly, who disputed the lead with GRAYDON before DUNROBIN shot through three furlongs out.

DaCosta calling in two-kilo claiming apprentice, Raddesh Roman, to partner SERGEANT RECKLESS at 109lb shows exactly where his sentiments rest with two starters, the other being United States-bred AMERICAN INVADER with Omar Walker astride, riding at possibly 116lb, unable to make the required 115lb.

Meanwhile, Nunes, who won two races on Saturday to buffer DaCosta's take from the SHE'S A MANEATER-STRANGER DANGER grade one walkover, has three runners in the line-up, including injury-plagued PATRIARCH, who hasn't raced since finishing last in August behind ZEPHYR, ANOTHER VIGOROUS and RAS EMANUEL.

Nunes has groping-for-form CORAZON breaking from the dreaded one hole whereas his third runner, dangerous PRINCE CHARLES, is fresh off back-to-back victories but might find the quicker horses on the stands' side long gone by the time he settles into stride.