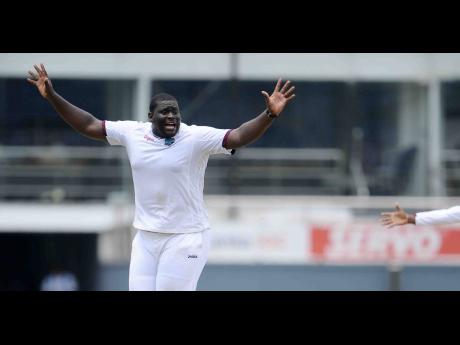 The 26-year-old Cornwall has been rewarded for his 10-wicket match haul by jumping 63 places in the bowling rankings to 47th. He claimed 10 for 121 as the Windies crushed Afghanistan by nine wickets inside three days in Lucknow.

Cornwall's effort, in only his second Test following his debut last August in the Caribbean, saw him become the first Windies spinner to claim a 10-wicket match haul on the subcontinent.

The 31-year-old Brooks, meanwhile, rose 68 places to 62nd in the batting rankings following his excellent 111 in the first innings - his maiden Test hundred in his third outing.

Off-spinner Roston Chase, who claimed three wickets in three overs in the Afghanistan second innings, has moved up five places to 34th.

Captain Jason Holder was rewarded for his five wickets in the match, jumping one spot to a career-best third spot in the bowling rankings behind Australian seamer Pat Cummins and South African speedster Kagiso Rabada, who occupy the top spots.

The 28-year-old's movement has also seen him consolidate his top ranking in the all-rounders charts. At 35th in the batting rankings, he is the highest-ranked Windies player with Dowrich next best.