What to watch in Europe top leagues 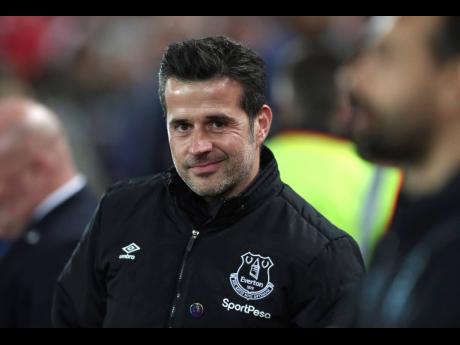 Everton’s manager Marco Silva is seen before the English Premier League match between Liverpool and Everton at Anfield Stadium on Wednesday. 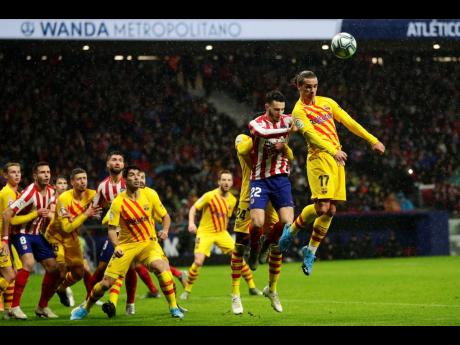 LONDON (AP) -- What to watch for in the leading football leagues in Europe this weekend:

Everton try to move on from manager Marco Silva when they travel to fourth-place Chelsea tomorrow, hoping to turn around a poor run of form that has landed the club in the relegation zone.

Silva was fired yesterday, a day after a 5-2 loss to Liverpool -- the club's eighth defeat in 11 Premier League matches.

Former player Duncan Ferguson will take temporary charge of the team but faces a daunting list of fixtures, with games against Manchester United and Arsenal coming up next.

The headline fixture this weekend is the Manchester derby with neither neighbour where they want to be. City are already 11 points behind leader Liverpool in their title defence, sitting in third place. United are another 11 points back in sixth.

Leicester are Liverpool's closest challenger and Brendan Rodgers' second-place side will be chasing a club-record extending eighth successive win when they play at Aston Villa on Sunday.

Jose Mourinho's Tottenham host Burnley tomorrow while the round concludes with Arsenal at struggling West Ham on Monday.

Atletico Madrid visit Villarreal today in serious need of a victory to avoid falling further behind in the Spanish league title race.

Diego Simeone's side only hasve one win its last seven matches across all competitions. They will travel to Villarreal after back-to-back 1-0 losses at Juventus and against Barcelona at home.

Atletico have slid into sixth place at six points adrift of leader Barcelona and Real Madrid, who are in second place on goal difference. The two powerhouses also have a game in hand against one another.

Sevilla, who are a point behind the frontrunners, visit Osasuna on Sunday in the first match for the hosts since their run of 31 home matches without a loss was ended by Athletic Bilbao.

--By Joseph Wilson in Barcelona, Spain.

Surprise league leader Borussia Monchengladbach are dreaming of a return to its 1970s glory days, but will have to get past a tough game tomorrow against Bayern Munich.

It's a crucial test for Bayern, who are fourth after a 2-1 loss to Bayer Leverkusen last week, interim coach Hansi Flick's first defeat in the job.

With Gladbach and Bayern taking points off each other, the big winner could be second-place Leipzig. Julian Nagelsmann's team is one point off Gladbach at the top as it takes on Hoffenheim.

Inter will be hoping to move four points ahead of eight-time defending champion Juventus, which visits third-place Lazio tomorrow.

Lazio are six points behind Juventus and two points above its city rival Roma.

Napoli will be hoping to take advantage of any slip-ups as theey aim to end their winless run of eight matches when they visit Udinese.

Well before the rivalry between Marseille and Paris Saint-Germain was heavily promoted by the clubs' owners, the classic game of the 1980's pitted Bordeaux against Marseille.

Having won 16 titles between them, Bordeaux and Marseille established themselves as French football powerhouses long before PSG even existed.

But with Bordeaux a fading force and Marseille no longer a real contender for the French league title in recent years, the matchup lost its interest.

Until this season, when Marseille and Bordeaux have proved to be the main challengers to PSG's supremacy. Ahead of their meeting at the Stade Velodrome on Sunday, Marseille sit second in the standings, five points above third-place Bordeaux.

Despite a messy ownership situation at Bordeaux that led to fan protests midweek, the team coached by Paulo Sousa has been one of the most entertaining sides so far. Unbeaten in their past six matches in all competitions, Bordeaux travel to the nine-time champions on the back of a 6-0 win over Nimes. Marseille are full of confidence too, having won their past five league matches.