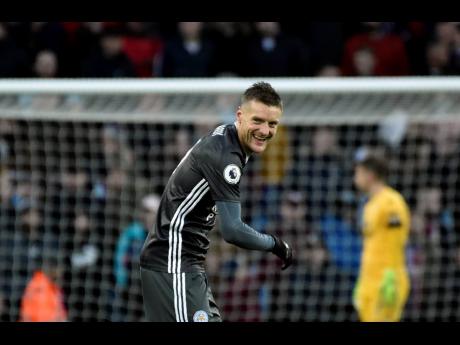 Leicester have rolled the clock back four years with another title challenge that gathered more momentum, with Vardy netting twice in a 4-1 victory over Aston Villa yesterday.

The problem for Leicester manager Brendan Rodgers is that Liverpool are eight points in front. There is still more than half the season remaining and a meeting between the top two on December 26.

“I don’t think anyone expects us to be near the top,” Rodgers said. “After Manchester United won at Manchester City on Saturday, the caption came up about how far City are away from Liverpool (14 points). We respect that. We get on with our work and keep developing as a team.”

Rodgers knows all about title challenges, winning the Scottish top flight twice with Celtic after falling just short of City in the 2014 title race while managing Liverpool.

He watched from afar as Claudio Ranieri defied 5,000-1 odds to win the Premier League for Leicester in 2016.

“We have finished ninth in the last two seasons, but today, we looked like a top team,” Rodgers said. “It was a real historic day. To surpass the club record of straight wins in the top flight was fantastic for us.”

Vardy opened the scoring in the 20th minute, and Kelechi Iheanacho doubled the lead four minutes before half-time.

Jack Grealish pulled a goal back in first-half stoppage time, but Jonny Evans’ header after the break restored Leicester’s two-goal advantage. Vardy wrapped the game up with 15 minutes left, and the striker is three games from matching his record of scoring in 11 straight Premier League games in the title-winning campaign.

“Jamie is such a top-level player. He is always ready when the chances come,” Rodgers said. “I don’t think there’s any doubt he isn’t going to score.”