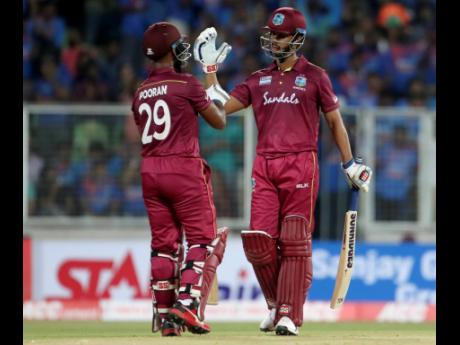 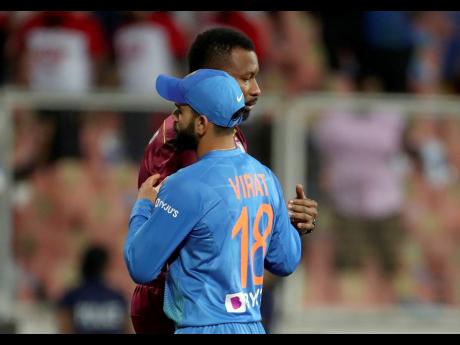 Veteran opener Lendl Simmons stroked his first half-century in nearly four years while Nicholas Pooran made an instant impact his first match back from a ball-tampering ban, as West Indies brushed aside powerhouses India by eight wickets to level the three-match series 1-1 yesterday.

Needing a victory to keep the Twenty20 International series alive, West Indies comfortably chased down 171 at the Greenfield International Stadium, to break a seven-game losing streak to the Indians and turn Wednesday's third game at the Wankhede Stadium in Mumbai into the series decider.

The 34-year-old Simmons, playing only his third T20 International in two and a half years, emerged from a stuttering start to top-score with an unbeaten 67 off 45 deliveries, while Pooran arrived late to lash an imperious unbeaten 38 from just 18 balls.

Opener Evin Lewis extended his good form with 40 from 35 deliveries and was joined by Shimron Hetmyer, who struck a cameo 18-ball 23.

The result was still in limbo at 73 for one at the halfway stage with the Windies facing a stiff required run rate of nearly 10 runs per over, but Simmons galvanised the run chase at the back end, as the Caribbean side got home with nine balls to spare.

Sent in earlier, India came up short on 170 for seven off their 20 overs with only Shivam Dube, who top-scored with 54 from 30 deliveries, and wicketkeeper Rishabh Pant with an unbeaten 33, showing any real enterprise.

In fact, they were the only two to pass 20 in an unusually flat Indian effort, which saw the hosts manage just 77 runs over the last 10 overs.

India's lack of verve was due mainly to leg-spinner Hayden Walsh (2-28) and seamer Kesrick Williams (2-30), both of whom made key strikes at crucial stages to finish with two wickets apiece.

KL Rahul fell cheaply for 11 in the fourth over, holing out to deep square leg off left-arm spinner Khary Pierre and Rohit Sharma followed for 15 in the eighth over, losing his leg stump to pacer Jason Holder.

Dube then dominated a 41-run, third-wicket stand with captain Virat Kohli, pummelling three fours and four sixes, as India reached the halfway stage at 93 for two.

Once Dube skied the third ball off the opening spell from Walsh - belated introduced in the 11th over - and was taken at cover by Hetmyer, India's innings lost impetus.

Kohli never got going either and steered Williams to Simmons at short third man in the 14th over to perish cheaply for 19 in the 14th over, and it was left to left-hander Pant, with three fours and a six off 22 balls, to provide the late runs.

In reply, both Simmons and Lewis benefited from early chances to post 73 off 59 deliveries for the first wicket and put the Windies in command.

Simmons was dropped on six in the fifth over from pacer Bhuvneshwar Kumar and two balls later, Lewis was put down on 16 by Pant diving to his left.

Both made the most of the let-offs, Simmons blasting four fours and sixes, and Lewis belting three fours and sixes before missing a charge at off-spinner Washington Sundar and going stumped in the 10th over.

Simmons, who managed just 10 from his first 14 balls, found his touch to reach his sixth T20 international 50 off 38 balls at the end of the 15th over by clearing the ropes at long on with leg-spinner Yuzvendra Chahal.

Crucially, he put on 39 for the second wicket with Hetmyer before adding 61 in an unbroken third-wicket partnership with Pooran, which erased any doubt over the result.

Left-hander Pooran, sidelined for the last four matches because of an ICC ban, made his presence felt with four fours and a brace of sixes, and finished the game by swatting seamer Deepak Chahar to the midwicket boundary.