Batsmen guilty as Windies U-19 slump to defeat 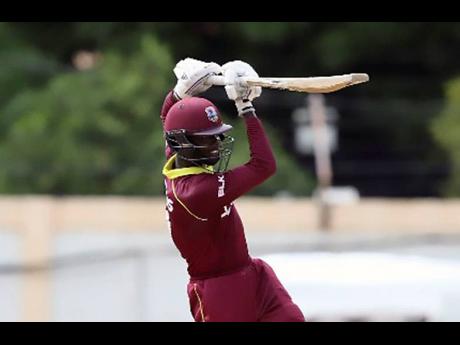 A batting meltdown saw West Indies Under-19s squander a golden opportunity for their second win of the Tri-Nations Series, when they slumped to a 29-run defeat to England Under-19s yesterday.

What should have been a straightforward run chase in pursuit of 170 for victory at the Vivian Richards Cricket Ground quickly became complicated as West Indies declined from 74 for two in the 12th over, to be all out for 140 in the 37th over.

Captain Kimani Melius top-scored with 46 from 32 deliveries, while Kirk McKenzie chipped in with a patient 33 from 54 balls but no other batsman passed 20.

New-ball seamer George Balderson was the chief destroyer, claiming four for 47, while fellow pacer Kasey Aldridge was among the wickets again with three for 32.

Pacer Nyeem Young (3-16) and off-spinner Matthew Patrick (3-27) had earlier snatched three wickets apiece to help limit the young Englishmen to 169 in the final over.

Dan Mousley, at number seven, struck 48 while Thomas Clark scored a run-a-ball 34 but the innings struggled for momentum and never really got going.

Opting to bat first, England slumped to 19 for two in the eighth over before Clark, who counted six fours, put on 44 for the third wicket with Jack Haynes (15).

Both perished in the space of nine balls with a single run added and their demise led to a slump which saw four wickets tumble for 24 runs. It was left to Mousley, who hit four fours and a six, to rally the innings in two partnerships.

First, he put on 27 for the seventh wicket with Balderson (8) before adding a precious 55 for the ninth wicket with Scott Currie, who finished 22 not out.

In reply, the hosts slipped to 19 for two in the fifth over after Balderson knocked over both openers in the same over but Melius and McKenzie stitched up the innings in a 55-run third-wicket stand.

Melius attacked almost from the outset, clobbering five fours and a brace of sixes, while McKenzie counted three fours and a six.

Once Melius fell in the 12th over, the innings quickly unravelled as the last eight wickets went down for 66 runs.