Fraser-Pryce: Tokyo will be my last Olympics 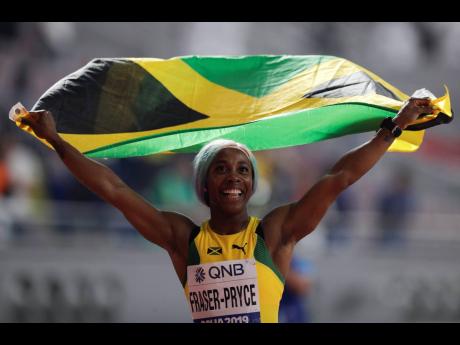 Shelly-Ann Fraser-Pryce celebrates after winning the gold medal in the women’s 100 metres final at the World Athletics Championships in Doha, Qatar, on September 29, 2019.

Multiple World and Olympic champion Shelly Ann-Fraser Pryce says that next year's Olympic Games in Tokyo will be her last.

In an interview with British newspaper The Telegraph in late November, the 32-year-old said that she is at peace with her decision to compete for one more Olympic title. "I am always grateful for the opportunity to represent my country, my family, myself, but Tokyo is my last Olympics. I definitely know that," she said.

"It doesn't make me feel anything. I will miss the sport, but I will be OK. I don't think it will be hard to retire. Athletics is just one thing I do."

Fraser-Pryce made her return to athletics this season, two years after the birth of her son Zyon, saying that she knew that she had the fortitude and the ability to return to competition despite the long layoff.

"I was nervous, taking all that time off, but I had the willpower, the fearlessness, because I knew from experience it was possible to come back," she said.

She capped off her comeback by becoming a four-time 100m world champion at the World Athletics Championships in Doha, Qatar, in September. The multiple world and Olympic champion demolished the field in a world-leading 10.71 seconds to become the oldest woman to win the title and the first mother to win a world or Olympic title in 24 years.