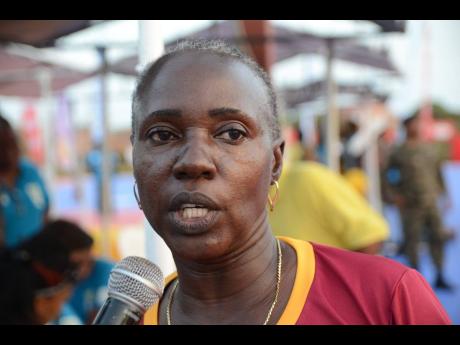 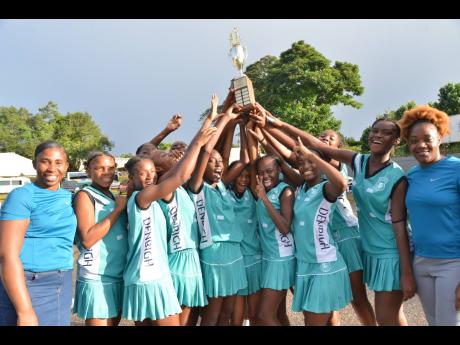 Denbigh High School pose with their trophy after capturing the ISSA Schoolgirls All- Island Junior Netball title with a 22-15 win over Gaynstead High School at Manchester High School, yesterday. 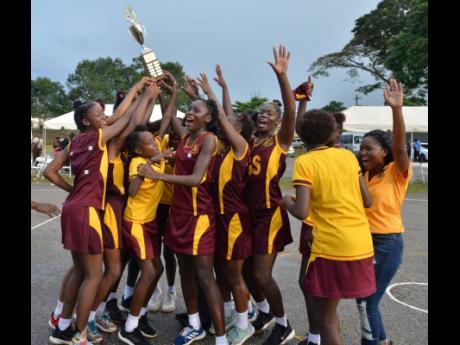 Denbigh got the better of defending champions Gaynstead 22-15 in the junior final, while Holmwood stopped Excelsior 40-36 to take the senior crown in the feature game. The nine-time champions Holmwood were favourites to win their senior encounter against Excelsior and avenge their defeat two years ago to the urban area queens. However, they were made to sweat as Excelsior produced a brave display against their rural rivals.

Holmwood controlled the first quarter, with goalshooter Shadine Bartley and goal attack Aaliah Lue bang on target from the opening exchanges, powering their team to a 11-8 first-quarter lead.

Excelsior’s goalshooter Rasheda Robinson and goal attack Camai Manahan got in the game, as Holmwood hanged on to their three goals margin with a 21-18 half-time lead.

Excelsior came out firing after the break with Manahan scoring three unanswered goals in the first two minutes to reduce the deficit by one as Holmwood led 22-21 before Excelsior levelled the score at 22-22 in a ding-dong battle.

Both teams exchanged scores and despite heavy showers with less than two minutes to go, both teams maintained their intensity, and with the score tied 29-29 at the end of the quarter, the stage was set the stage for an epic final quarter.

Despite taking a 33-30 lead, Holmwood came under immense pressure from their opponents, who rallied to level the score at 33-33 and should have taken the lead but turned over the ball.

Excelsior got many more chances to take the lead, but turnovers and brilliant plays from Holmwood’s wing defence Kimberly Myen and goal defence Crystal Plummer denied them as Holmwood held on in the end for the win to secure their 10th title overall.

Bartley, with 22 goals from 35 attempts, and Lue, with 18 from 21, scored most goals for Holmwood. For Excelsior, Manahan top scored with 24 from 38, with Robinson assisting with 12 from 19.

“I am elated with this win, as this is our first title since 2015. Excelsior played hard but my girls had the guts and stamina and they fought well as they really wanted this one. It was sweet revenge for two years ago,” said winning coach Carline Graham-Powell.

“Holmwood played well and they wanted it more than us. Our players did not react well to their (Holmwood’s) good start and we were let down by indiscipline and indecision in our shooting areas resulting in too many turnovers,” said Smart.

Meanwhile, it was a stroll in the park for the Janice Walker-coached Denbigh, who dethroned Gaynstead for the junior title.

Like she did in the rural final against Glenmuir, goalkeeper Roxanne McLeod was at her best, making several timely interceptions. Goalshooter Ramona Halstead top scored for Denbigh with 13 from 20, with goal attack Sade McCalla chipping in with nine for 10. For Gaynstead goal attack Quanna Aiken was best with eight from 14.