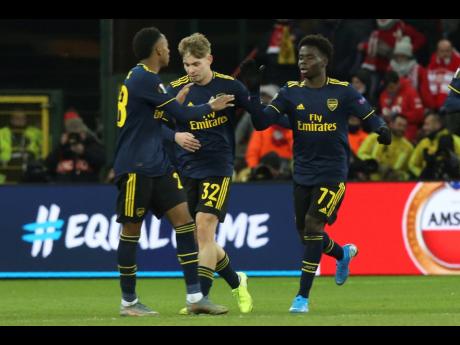 Teenager Bukayo Saka scored one goal and set up another to secure a 2-2 draw for Arsenal at Standard Liege yesterday and lead the Gunners into the next stage of the Europa League.

The result meant Arsenal finished top of Group F ahead of Eintracht Frankfurt, which gave up a late lead to lose 3-2 at home to Vitoria.

However, Bundesliga leader Borussia Monchengladbach surprisingly went out after a 2-1 loss to Istanbul Basaksehir, with Enzo Crivelli scoring in injury time to complete a comeback victory and send the Turkish side into the knockout stages.

Malmo won Group B with a 1-0 away victory at Copenhagen, which still joined the Swedish side in the next round.

Getafe needed at least a draw from the last game against Krasnodar to advance from Group C and cruised to a 3-0 victory. Cluj advanced from Group, E thanks to a 2-0 victory over group winner Celtic.

A 1-1 draw with Ferencvaros sent Ludogorets to the next phase from Group H.

Manchester United and Sevilla were among 13 teams to have already clinched a spot in the round of 32. The eight third-place finishes in the Champions League - including Ajax, Benfica and Inter Milan - will also enter the competition at that stage.

The draw for the round of 32 is scheduled for Monday.