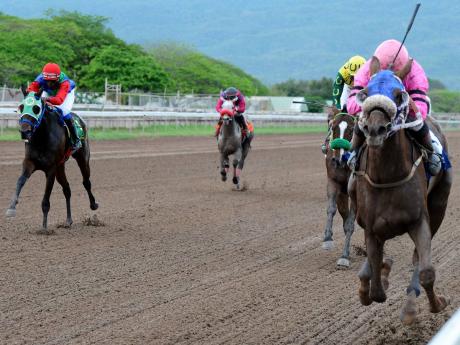 IT’s SENTIENT’s turn to frank the Diamond Mile form, lining up against 15 rivals in Saturday’s Seymour ‘Foggy’ Mullings Memorial at a mile, following top-shelf performances from SHE’S A MANEATER, STRANGER DANGER and TOONA CILIATA, who did lose a suicidal second run in 10 days, a stinging defeat to stablemate EXHILARATE.

Reporting off a fourth-place finish in the Diamond Mile, beaten two and a half lengths by second-past-the-post STRANGER DANGER, and third in the Superstakes before that run, races comfortably won by SHE’S A MANEATER, SENTIENT proved competitive against all and sundry except the super mare, who outclassed rivals in both events.

Drawing a line through TOONA CILIATA, SENTIENT was a length and a half behind him in the 10-furlong Superstakes and a half-length adrift in the Diamond Mile, holding fourth in the second-fastest mile ever run at the park, coming out with a time of 1:37.0, three-fifths of a second slower than SEEKING MY DREAM’s 1:36.2, which SHE’S A MANEATER lowered to a terrific 1:35.1.

Far below his best

The chestnut colt was third in the 2000 Guineas, second in the Governor’s Cup and the derby before the mileage took toll in the St Leger, sentencing the wiry runner to a fifth-place finish, looking far below his best.

A month later he was stumped by an improved TOONA CILIATA in the Royal Dad Trophy after which he slumped to a shock loss against stablemate SHE’S AN INTROVERT at a mile, apparently returning too soon, two weeks after his exertions at nine furlongs and 25 yards.

SENTIENT’s performances in the Superstakes and Diamond Mile, three weeks apart, suggest he has begun to cope better with the rigours of racing. Returning off a month’s break, a longer rest period than the first three past the post in the Diamond Mile, he gets an ideal distance against horses, who he has had the jump on from this season’s three-year-old classics.

ROY ROGERS, EARN YOUR STRIPES and ENUFFISENUFF, who will want to set up the pace for stablemate SEBASTIAN, are the horses expected on the lead. However, SENTIENT, who sat close enough to splits of 45.3, 57.2 and 1:09.2 to the top of the lane in the Diamond Mile, should have no problem stalking and overpowering rivals coming off the turn.

Tread carefully in the Dye Job Sprint, not only are they two-year-olds, the ghastly act of having local juveniles go up against foreign-bred horses, at least one of whom, CRAFTY AND READY, after beaten by a fellow foreigner, has a weight allotment that is lighter than a native-bred.