Trevor’s Choice speed could be the difference 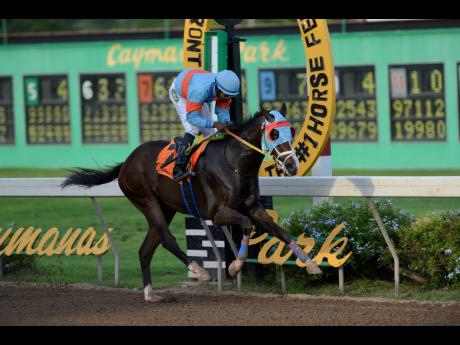 T RAINER Alford Brown might just get away with recalling Shane Ellis to partner TREVOR'S CHOICE at 123lb, instead of cutting weight with an apprentice, in tomorrow's Restricted Stakes at five and a half furlongs, only because he has an abundance of speed and the closer, Richard Azan's DUKE, has topweight 126lb from an outside draw.

TREVOR'S CHOICE has had consecutive strokes of bad luck, first suffering a slipped saddle at five furlongs straight, down the track behind BOLD AFFAIR on November 2, then declared a non-runner, four weeks later, after Ellis was injured in a spill and no replacement rider was found for the last event of the day, the six-furlong Ron Ron Trophy, won by CRYPTOCURRENCY.

Brown has doggedly stuck with Ellis, who is due to present a medical certificate, clearing him to ride on Wednesday, after doing duties in St Lucia last Friday. He has also removed the blinkers off TREVOR'S CHOICE, who won wearing the equipment with Omar Walker astride, clocking 1:06.1 at Wednesday's distance, on October 19, easily dismissing YETAGAIN.

Stepping up in class to face non-winners-of-three on November 2, TREVOR'S CHOICE tried stealing a march at five furlongs round but found PRINCE CHARLES too improved and was caught a half-furlong out after disposing of much-too-heavy ROJORN DI PILOT.

TREVOR'S CHOICE was clearly second best on the day, but carrying 110lb, 13 lighter than the 123 Brown has volunteered to have him lug by ignoring apprentices at his disposal from two separate batches.

However, a 46.0-on-the-bridle horse, taking the shortest route to the half-mile and into the lane, from post-position one, with no matching speed, TREVOR'S CHOICE could get away from rivals and might do the trick for Brown and Ellis.

TREVOR'S CHOICE outspend all of SOUL CURE, UNIVERSAL BOSS, FORMAL FASHION, NUCLEAR EVITA, WESTERN WHEELS and CASUAL DRINK before PRINCE CHARLES came storming after a bad break. PRINCE CHARLES returned six days later to clock 1:18.4 at six and a half furlongs, carrying 121lb, and was back a month later, chasing home stablemate PATRIARCH in an overnight allowance, at five furlongs straight, won in 57.3.

Should TREVOR'S CHIOICE quit under the big weight, it will be a feeding frenzy of piranhas. The sneaky pair of SOUL CURE and FORMAL FASHION will be there, along with UNIVERSAL BOSS and late-closing DUKE, who will have Dane Nelson urging him to pick up the pace from early down the backstretch.

Meanwhile, conditions for the day's open allowance at five furlongs round, which has reduced to a six-horse field, represented by three trainers, have all but killed the event.

EXHILARATE has allotted topweight 126lb, giving 16lb to MR UNIVERSE, no wonder the sprint was moved from race 8 on the overnight programme to almost a curtain-raiser, the second race, on the final.