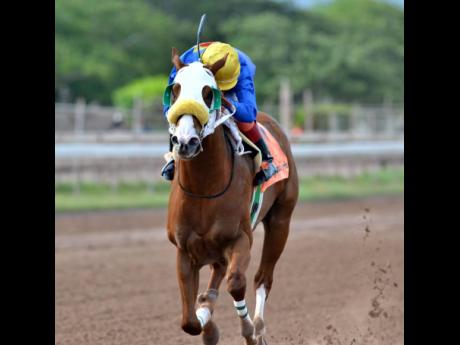 P RINCE CHARLES' form has become a handicapper's guide, 'key races', pointing not only to winners but also exactas such as CRYPTOCURRENCY-ROY ROGERS, two Saturdays ago, and TREVOR'S CHOICE-DUKE on Wednesday, making the Anthony Nunes-trained gelding a sure shot in Saturday's overnight allowance, even though facing former-stablemate-for-a-month, GOD OF LOVE, who had beaten him by a length back in June when taking orders from Philip Feanny.

Among a trio of three-year-olds in the non-restricted overnight allowance, a race with restrictions (don't laugh), PRINCE CHARLES should find the six-furlong trip right up his alley, hopefully, carrying 117lb should Dane Nelson make weight.

Last time out, PRINCE CHARLES floated home in second place behind stablemate PATRIARCH at five furlongs straight, a ripping 57.3, which beat him by only three-quarter length, after running with the track bias against him from post-position three.

PRINCE CHARLES' off-colour stablemate, CORAZON, was also in the event, as well as MSMYRTLERICHIEGIRL and K D FLYER, who ran his usual honest race for third place. None of the three are expected to test PRINCE CHARLES, whose running style is better suited to the round course, especially six furlongs.

GOD OF LOVE looked really 'boasy' last Saturday, clocking 1:04.4 at five and a half furlongs, on what has a zippy track for the last two or three weeks, possibly longer. However, Nunes jettisoning his recent trainers' battle acquisition for $1m claim tag can't be a good sign, not for a horse whose previous race was a fourth-place finish, three lengths behind ANOTHER BULLET, a little over a month ago, in the grade-one Caribbean Sprint.

No matter how desperate Nunes might have, he had started the afternoon almost $7m ahead of outgoing champion trainer, Wayne DaCosta, and certainly didn't need the $491,400 winner's purse to add to the inevitable, further indicating that sparingly-trained GOD OF LOVE was nothing but a garage sale.

Returning a week later, GOD OF LOVE will try making all but will have PRINCE CHARLES jumping down his throat from very early, putting pressure on whatever issues that had caused Nunes to drop him like a hot potato.

Meanwhile, two-year-olds of opposite sex line up in respective gender races at five furlongs round, the Royal Lancaster Trophy, for colts and geldings, and the Sunnyside Stakes for fillies. Tread carefully in these events. Exercise reports may flatter to deceive and pedigree is proven in races, not the Yearling Sale catalogue.

Though sired by Market Rally, which indicates he would have preferred in excess of five furlongs, Gary Subratie's PHARAOH IT IS, a Noon It Is offspring, is the best bred, on paper, and caught the eye in 35.4 for three furlongs, fitted with head gear, which, by his trainer's standards, was an unusually fast gallop.

Fillies, fillies, fillies, even worse, maidens, can be troublesome. However, VERSATILE VISION's three performances against top colts make her the automatic choice in the Sunnyside.