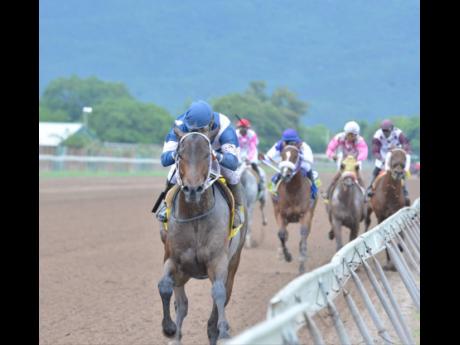 DON'T be too late getting to Caymanas Park, or head to the lunch line at the usual time on Thursday, a risk which could result in watching WOW romp the Jamaica Two-Year-Old Stakes via replay, sometime after 1:30pm, the third event on a nine-race Boxing Day, yes, holiday, card.

WOW, who is all set to be the first horse to bag the $1m bonus for sweeping the Supreme Ventures Limited Jamaica Two-Year-Old Series, a great advertisement for the local breed, having passed through the Yearling Sale, whether a buy-back or not, has reduced to an opening act for lower-level horses eight days shy of turning five, six and seven years old, ensuring a perceived 'sure winner' is kept out of the Twilight Pick-6 carry-over, $4.4m, starting at the fourth event.

Wayne DaCosta's FEARLESS CHAMPION, who was five and a half lengths behind WOW in last month's Pick-3 Super Challenge, at seven furlongs, should again be the exacta horse.

Gary Subratie's SENTIENT and his crew survived the Pick-6 axe and will contest the eighth event at seven and a half furlongs. Tread carefully though SENTIENT, on paper, appears to be the horse to beat after cut down by a flying PRINCESS AVA at a mile two Saturdays ago, losing by two and three-quarter lengths in a fast-run 1:37.3.

SENTIENT reported with one easy gallop, 1:10.1 for five and a half, the last five in 1:03.0, with what appeared to be vet wraps on all four, a little over a month after placing fourth in the November 9 Diamond Mile.

Prepping for Thursday's race, SENTIENT still hasn't asked a serious question at exercise, some six and a half weeks after the Diamond Mile, for which he had contrastingly warmed up with a zippy 1:06.1 for five and a half furlongs.

Should SENTIENT, now fitted with a visor, replacing blinkers, falter again in the stretch run, Anthony Nunes' TRICKY ONE, PRINCESS AVA'S stablemate, who was only three-quarter length behind him in third place at a mile, could be the spoiler, although carrying topweight 126lb.