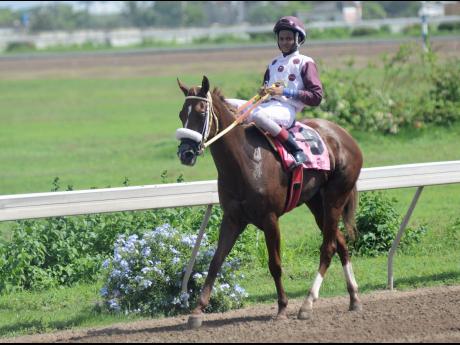 AMERICAN INVADER, with Raddesh Roman aboard.

OMAR Walker has been called on by Wayne DaCosta to pull off another of his getaway acts, aboard AMERICAN INVADER, in Saturday's overnight allowance at five and a half furlongs.

Famous to some, infamous to others, for his penchant to cripple rivals with a signature three-furlong move, Walker gets a decent draw, post-position two, to steal the race with the United States-bred filly, who has a nine-pound swing in her favour against PLEASANT SECRET, whose trainer, Stanley Findlay, appears to be fitted with blinkers, oblivious to a plethora of available claiming apprentices.

As quick as she may be, AMERICAN INVADER is bound to have company on the lead, DUNROBIN, who breaks from an outside draw, the seven box, in the eight-horse field, not a bad stall from which the speedster can attack with Trevor Simpson riding at 111lb, six lighter than Walker.

AMERICAN INVADER, PLEASANT SECRET, and DUNROBIN last met at five furlongs round, an event won by LADY BLUE on November 9, Diamond Mile Day, when DaCosta was expected by some to miraculously salvage his slipping title.

DUNROBIN had zipped to the front from post-position one before being joined by AMERICAN INVADER, whose rider, Raddesh Roman, appeared more interested in what CORAZON, from rival trainer Anthony Nunes' barn, was doing on the inside, while stablemate LADY BLUE crept up on his outside with Walker astride.

After LADY BLUE hit the front and disposed of DUNROBIN a furlong out, PLEASANT SECRET, running with 110lb, came charging inside the last half-furlong, finishing a well-held three-quarter length adrift for second place.

Interestingly, AMERICAN INVADER rallied on the outside in the scrap for the minor placings, grabbing fourth spot, relegating DUNROBIN to fifth, by about a half-length.

The trio returned, in separate races, within a three-week span, November 23 to December 6, each running creditably in tough races. However, AMERICAN INVADER appears best-trained for a sprint on the round course, taken to task by DaCosta with three speed gallops after Diamond Mile Day, November 17, 23, and 30.

The outgoing champion trainer afterwards backed off the throttle in December, using a fourth-place run behind PATRIARCH's 57.3 at five furlongs straight before polishing the prep with three furlongs in 35.3 on the round last Saturday morning.

Having kept Walker aboard AMERICAN INVADER, instead of calling in five-pound claimer Roman, tells that DaCosta has opted for experience over weight aboard a speedster, who has a nine-pound advantage on the run-on sprinter, PLEASANT SECRET.