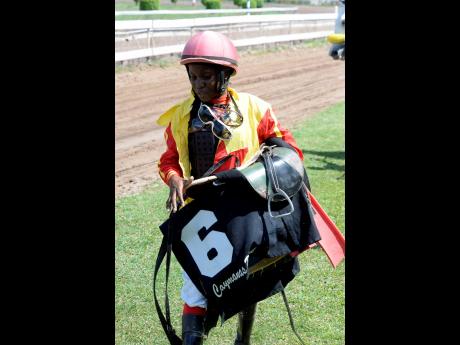 Jockey Natalie Berger says that she is still counting her lucky stars after she was involved a fall when her horse WARRIOR went down in a deep stretch in the fourth race after breaking his two front legs at Caymanas Park on December 18.

The 26-year-old Berger, who suffered a concussion, spent two days hospitalised after the incident.

“There were no broken bones and the CT scan was OK,” she said. “I am just having some headaches because I had a minor head concussion after the fall, but I am doing fine. This is one of the worse falls of my career, because I didn’t know that I fell off the horse until I woke up in the hospital and I was asking for the horse.”

Berger, who has ridden one winner this year, said that she is not sure when she will be able to return to the track because of the headaches.

“I have to take it slow because I haven’t recovered fully as yet and the doctor says I need some rest,” she said.

She says that despite the fall, she plans to continue riding as long as possible.

“I will return to riding because one fall is not going to stop me from riding at Caymanas Park,” Berger, who was won 18 races since she began her career in 2015, said.

Berger, who is one of four female jockeys who are currently plying their trade at Caymanas Park, said that she is hoping to secure more success in the saddle next year.

“I think that next year will be a much better one for me because once I am getting the rides, things will be easier. I am going to ensure that I work twice as hard as this year,” she said.