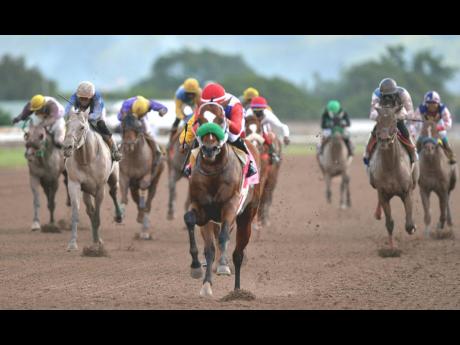 BEATEN to the draw by dethroned Wayne DaCosta on New Year's Day, new champion Anthony Nunes should get his reign rolling with a three-timer on Saturday's programme: PATRIARCH, BIGBANG, and SAN SIRO.

PATRIARCH, who easily beat his stablemate, PRINCE CHARLES, and Wednesday's winner, K D FLYER, in an overnight allowance on December 6, returns at five furlongs straight, running on a tag in a $1 million optional-claiming event, facing six rivals, none of whom, apart from CAMPESINO, are even worth mentioning.

Having the track bias to his advantage won't make a difference for CAMPESINO, who is drawn widest, after starting from a similar pole when PATRIARCH, breaking from an inside draw with 126lb, launched a blitzkrieg of speed to clock 57.3 at the distance.

BIGBANG is among three Nunes runners in the City of Kingston Centenary at a mile, a seven-horse field of $750,000 optional claimers. None of Nunes' horses are entered on tags, BIGBANG being the standout against his stablemates, ROHAN KABIR and UNIVERSAL BOSS.

Running at odds of 21-1 in the December 14 Seymour Mullings Memorial, BIGBANG finished sixth behind stablemate PRINCESS AVA, who beat SENTIENT and fellow Nunes runner TRICKY ONE. ROHAN KABIR was also in the event, some nine lengths down the track behind BIGBANG.

Before that effort, BIGBANG had upstaged stablemate EARN YOUR STRIPES at nine furlongs and 25 yards, chasing ROY ROGERS into the lane before the winner, CRIMSON, and TRICKY ONE relegated him to fourth.

UNIVERSAL BOSS is stacked with tactical speed and has already won up to seven and a half furlongs. However, he hasn't been doing much at exercise for the last month and might find it tough to slip BIGBANG, who finished ahead of him at six and a half furlongs, closing for third behind their stablemate, PRINCE CHARLES, on November 8.

SAN SIRO came forward menacingly with THEPOWERSTHATBE, at seven furlongs, last Saturday, but were both blown away by COCO CHANEL's hurricane finish. Nunes' runner faces far easier opposition this time around and should easily control the pace until Shane Ellis asks him to run.