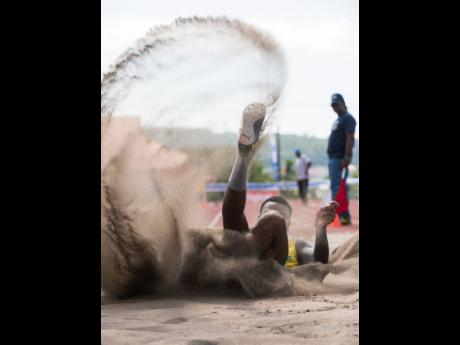 Kavian Kerr of St Jago executes his jump as he competes in the Class One Boys’ long jump event at the Purewater/JC/R. Danny Williams Development Meet held at the Jamaica College Ashenheim Stadium in St Andrew on Saturday. Kerr won the event with a distance of 7.53m.

THE local track and field season got off to a fine start at the Jamaica College (JC) Ashenheim Stadium on Saturday with the 27th staging of the Purewater/JC/R. Danny Williams Development Meet.

Athletes from top contending schools for this year's ISSA/GraceKennedy Boys and Girls' Athletics Championships (Champs), Kingston College (KC), Calabar, and Jamaica College (JC) on the boys side along with girls rivals Edwin Allen, Hydel, and St Jago, treated the fans to a spectacle, setting the stage for what is to come at Champs, which is set for March 24-28.

Th coaching staff at reigning boys champions KC will have their hands full when it's time to select their middle- and long-distance Class One teams for Champs as Kenyan Aron Tanui and Kirk Dawkins, who will be eligible for Champs this year after sitting out the last campaign, along with Amos Beadle, all had good results for them in the 5,000m Open and 1,500m.

There was also a win for the North Street-based team in the Class Two 110m hurdles.

Amontae Wray, 14.45 seconds, who was competing in the class for the first time, won ahead of Calabar's David Williams, 14.74, with KC's Yarie Lawrence taking third in 14.83 seconds.

Their athletes, Valeica Williams, 14.01, and Taffana Rose, 14.14, ran second and third in the Class One 100m hurdles, respectively, which was won by St Jago's Rosealee Cooper in 13.80 seconds.

Hydel also enjoyed three wins in the 100m led by the outstanding Ashanti Moore, the 2019 Class One double-sprint champion at Champs.

Moore took the Class One event in 11.74 seconds while Sheninique Hazle won in Class Four, in 12.28 seconds, with Alana Reid taking Class Three in a fast 11.76 seconds, ahead of teammate Kemika Hill, 11.86 seconds.

Edwin Allen's Serena Cole posted the fastest time on the day in the girls' 100m after winning the Class Two event in 11.61 seconds ahead of Hydel's Shenese Walker, 11.81 seconds.

The girls from Frankfield in Clarendon picked up three other wins on the day as Kayon Green, 2:16.07, won the Class One 800m, while Kayan Green, 4:51.47, took home the Class One 1,500m, and Rasheda Samuels won the Class Three High Jump after clearing the bar at 1.66m.