All eyes on Eye Candy 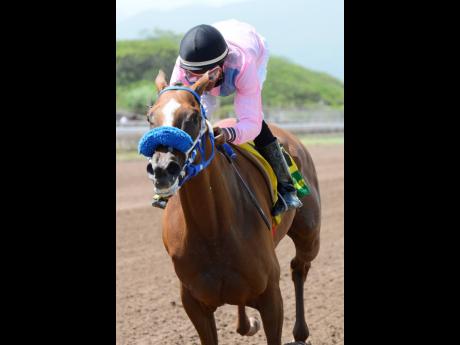 VETERAN trainer Dennis Lee has another of his sneaky coups up his sleeve on Saturday with EYE CANDY, using his now trademark claiming-apprentice move to summon Anthony Allen aboard the five-year-old mare in the closing event at six furlongs.

Lee has been using apprentices aboard the likes of ROY ROGERS, and EYE CANDY, up to a month ago, running rivals into the ground with relentless pace, taking advantage of every ounce of their weight allowance, to upstage heavier runners, who buckle in deep stretch.

A month ago, Lee used female apprentice Samantha Fletcher, riding at 101lb astride EYE CANDY, to collar WESTERN WHEELS at five and a half furlongs, outfinishing champion rider, Christopher Mamdeen, aboard the Anthony Nunes-trained runner.

A week later, EYE CANDY returned a rung up the optional claiming ladder with Fletcher, beaten four and three-quarter lengths by GOD OF LOVE, who posted 1:04.4 for five and a half furlongs, and returned to floor in-form PRINCE CHARLES in his subsequent race, an overnight allowance at six furlongs, clocking 1:11.3.

EYE CANDY is up against 12 rivals, her main foes being middle-distance runners, who prefer to settle for at least the first three furlongs before they get moving, KING TAVARI, REIGNING KING, YET AGAIN, NIGHT LIGHT and LATAPY perfectly fitting the bill.

Against slower horses, EYE CANDY is extremely dangerous, carrying 110lb with Allen, who has been coming into his own with winners such as SUNSHINE CAT, DYNAMAX CAT and SUPER AMIA, for Lee, on New Year's Day.

At six furlongs, Allen has absolutely no reason to wait around for the run-on horses aboard EYE CANDY, who finished on CAMPESINO's tail last time out at five and a half furlongs, now that she is actually stepping back down in class where she had beaten WESTERN WHEELS.

YET AGAIN, NIGHT LIGHT and LATAPY are all burdened with 121lb, breaking from outside stalls, whereas EYE CANDY, leaving post-position four, should be first, or thereabouts, to the half-mile, before Allen uses her natural pace to steal a march with the lightweight.

If there's a horse to bother EYE CANDY on the lead, outside of MR PANTHEON, who lacks the class to stay the trip at this level, REGGAE GONE GRAMMY, if she gets a clean break, could spoil Lee's plans.

REGGAE GONE GRAMMY returned off a four-month lay-up to go all the way in the six-furlong Flossie McNeil Memorial, on November 2 and ran creditably in her follow-up race behind CRYPTOCURRENCY.

Similar to the rest of the field in the New Year's Day Trophy, REGGAE GONE GRAMMY was thoroughly outclassed by KINGSMAN at six and a half furlongs. Throw out that race and note that she had prepped with a 1:15.1 gallop for six furlongs, which still stands strong, especially with her coming in at 108lb with new apprentice, Youville Pinnock, who has been growing in confidence.