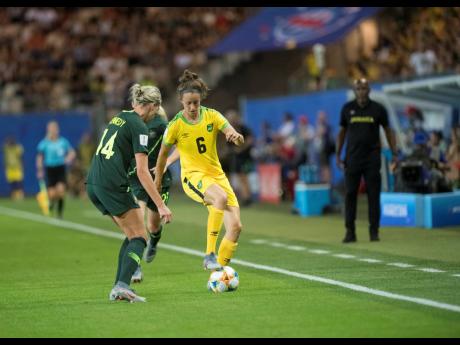 With two weeks to go before the final round of Concacaf Olympic qualifying, Jamaica international midfielder Havana Solaun says that the Reggae Girlz are suited to make another leap forward by qualifying for the Olympics this July.

The 26-year-old who recently joined Paris FC of the Women's French Division One says that the team, despite being in a difficult group with Olympic bronze medallists Canada, Mexico and Costa Rica, are capable of performing to their potential given the proper backing.

"I know we have a tough group but I also know the courageous team of girls representing Jamaica," Solaun told STAR Sports. "The Reggae Girlz are talented. With every game played, our confidence rises and experience grows. The World Cup brought us together, the Olympic qualifiers will keep us together. I think with the right resources and support we can compete with any team in the world."

Solaun's comments contrast the upheaval the team has experienced in the coaching ranks since their historic World Cup campaign. Hue Menzies, who was at the helm in France, wasn't on the sidelines for the Caribbean Olympic qualifiers in late September. He refused to continue to perform his duties until he and his staff were paid their outstanding salaries. Lorne Donaldson took charge, guiding the senior Reggae Girlz to first place in their group with four straight wins. However, Donaldson also resigned from his all duties associated with the women's programme yesterday, criticising the leadership of the Jamaica Football Federation (JFF).

Despite the turnover in the technical staff, Solaun says that new head coach Hubert Busby Jr gives the team continuity, which she believes will have a great influence on the players as they prepare for the tournament.

"With a new coach there will always be changes, however the team is very familiar with coach Busby and I think he will have a positive effect on the team," she said.

Eager to build of the momentum gained from last year's World Cup appearance, Solaun says advancing to the Games in Tokyo in July would be a major step in continuing the programme's growth.

"Qualifying for the Olympics would be a major leap for woman's football in Jamaica," she said. "I think qualifying for the World Cup put the team on the map. Now it's about continuing to grow as a group of players and as an organisation and federation. Competing at the world level is a challenge and adjustment. I think the more success the team has, the more power and strength we can help bring to women's football in Jamaica."

Jamaica begin their final round campaign against Mexico on January 29 before facing Canada and Costa Rica.