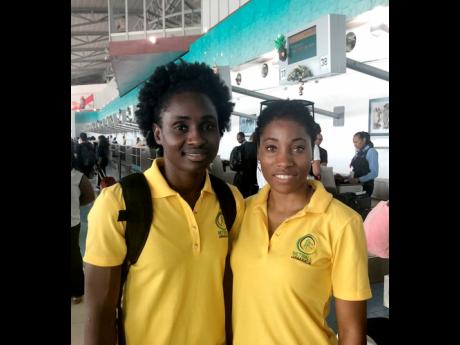 National senior team newcomers Shannika Johnson and Shadian Hemmings have vowed to make their marks for the Sunshine Girls in the four-nation Vitality Netball Nations Cup in England.

The series, which will be the Sunshine Girls' first outing since their disappointing fifth-place finish at last year's Netball World Cup, will run from January 19-26.

The 33-year-old Johnson, who can play as either a goalkeeper or goal defence, will be making her debut for the Sunshine Girls. Hemmings, 29, who has one cap for the national side, plays centre and wing defence.

Johnson, a former Mannings High star, said she is very grateful for the opportunity to represent the country noting that she will be doing her best to ensure that the Sunshine Girls are victorious at the championships.

"I am nervous and excited at the same time, but I am ready for this challenge," she said. "I have worked really hard to improve my game and I have been listening to the coach and so I am looking forward to giving my best for the team," Johnson added.

Hemmings, a former Herbert Morrison standout, said she will be using the series to secure a permanent place in the national team.

"I am looking forward to do well," said Hemmings. "It is my first overseas outing with the Girls and so I am hoping to have a great tournament. I am not feeling nervous because the senior girls who have doing this for sometime have made us (the new players) feel very comfortable and I am just going there with an open mind to try and make my mark in the series," she said.