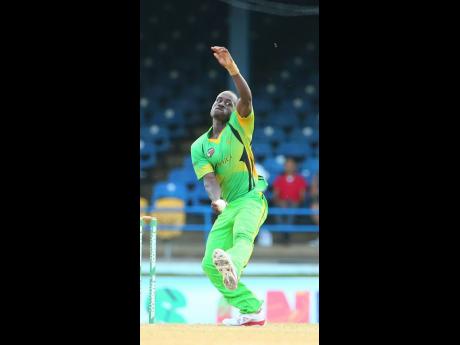 The Windward Islands Volcanoes held the advantage over the Jamaica Scorpions after day one in the second round of the West Indies four-day regional game at Sabina Park yesterday. At close, the visitors reached 314 for five after being sent into bat.

The visitors owed their fairly good position to two patient but well-compiled half-centuries. Kaveem Hodge struck 88 with 12 fours from 171 balls, while the ever consistent Devon Smith, who survived a dropped chance to Assad Fudadin at gully off the bowling of Derval Green before he had scored, made 77 with nine fours from 152 deliveries faced.

At one stage, the Volcanoes were 173 for two and looking to post a really huge total before Green, in an inspired burst, took the next three wickets to have the visitors at 242 for five. Green accounted for the wickets of Kirk Edwards for 29, captain Sunil Ambris for seven and the impressive Hodge, to end with three for 58 from his 20 overs.

A stubborn, unbroken sixth-wicket stand of 72 between Emmanuel Steward, 46 not out, and Keron Cottoy, 29 not out, pushed the Volcanoes beyond the 300-run mark. The two specialist Scorpion spinners, Jamie Merchant and Patrick Harty, ended wicketless, while there was one wicket each for Nicholson Gordon and Markino Mindley.

Play resumes this morning at 10.